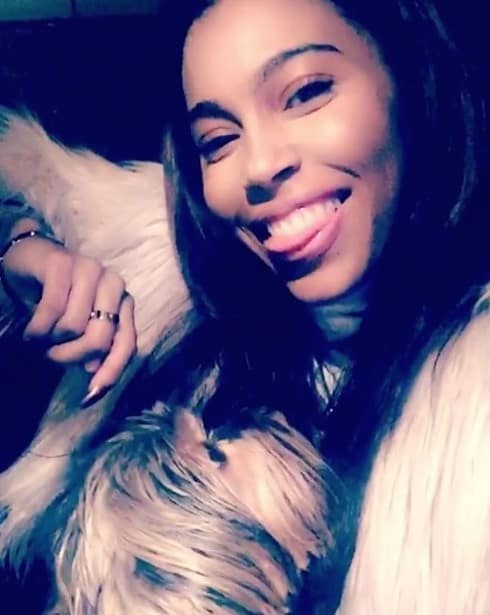 Snoop and Sofi Green could be much more than just friends, if the latest LHHNY rumors are to be believed. The strawberry-feeding, sex toy-promoting podcast that’s already become the stuff of Love & Hip Hop legend raised plenty of eyebrows among fans–many of whom, leery of alleged lesbian love plots after Mimi Faust and Chris Gould’s short-lived relationship during LHHATL Season 5, cried “gay for play” on social media.

To be fair, though, Love & Hip Hop has never featured a scene quite so heavy-handed (or fruit-happy) as when Snoop visited Sofi to record an episode of her podcast and promote her line of sex toys, but wound up being fed strawberries and discussing the (much) finer points of oral sex instead. And Snoop’s girlfriend J. Adrienne definitely didn’t think the whole thing was all in fun, as she made very clear both on the show and during one of VH1’s always-entertaining “Check Yourself” post-show recaps:

Of course, even if there is something going on between Snoop and Sofi Green–something more than good salesmanship, that is–J. didn’t seem too bothered by it two weeks ago. Snoop shared a video clip of herself and her girlfriend watching the sexy podcast episode of LHHNY as it aired, with Snoop protesting that she was merely trying to sell sex toys and J. seeming to be more mock-upset than genuinely bothered. After all, how mad can you really be when your boo’s head is in your lap?

So far, we’ve only got rumors to go on. And it may or may not be worth pointing out that Snoop hasn’t appeared in J. Adrienne’s social media feed in weeks, nor has J. been in Snoop since the above clip. But the situation between Snoop and Sofi Green and J. Adrienne will doubtless resolve itself over the coming weeks–either in the form of an unexpected and happy relationship, or more heated arguments and outright fights! Everyone’s a winner!