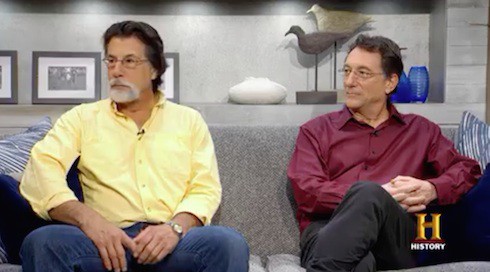 The latest Curse of Oak Island update comes just as History is set to debut the show’s especially high-tension Season 4. It looks like the passage of time is starting to weigh heavily on both Rick and Marty’s minds, as they look back to their treasure hunting roots and we’re reminded of the time limit Marty originally put on he and his brother’s quest.

The newest #OakIsland trailer features a wistful Rick looking back over his fifty-year fascination with the possibility of buried treasure. He can’t help thinking about how much his age at the time he found out about Oak Island’s many mysteries–remember, Rick was eleven when he first read about the island–influenced his decision to spend so much time scouring it. “I don’t like giving up,” Rick admits to Dan Blankenship, his long-time partner in the venture. “I think maybe if I’d have been 40 instead of 11 when I read that…who knows where we’d be right now?

“Instead of now being partners, we might have at one point been competitors,” Rick says. “But I’m grateful that we’re in the position we’re in.”

Elsewhere, Rick and Marty think back to their childhood and recall its influence on the treasure seekers they’ve become. When the two were just boys in Michigan, they used to make up stories about a giant rock in their backyard–one that doesn’t look so giant to them as adults–and the treasure buried beneath it. “We spent many and many an hour,” Marty recalls, “thinking about how we were gonna move that rock.”

Despite all their planning, though, Rick suggests he might have made up the whole story in the first place. “I don’t know,” he says, with a smile, to which Marty retorts: “Now comes the confession. Fifty years later.” It’s a poignant reminder that Curse of Oak Island, for all its promises of elusive, multi-million dollar treasure, remains at its core a story about both family and the things we choose to spend our lives believing:

And the reminder is all the more poignant because of the ticking clock that the show has become. At the very beginning of the show, as a Detroit News story reminds viewers, Marty “[set] a limit” on how long he would spend “pursuing this dream.” Rick, by way of explanation, said “My brother doesn’t believe in the paranormal.” And, of course, Marty’s career as an engineer and his success in the energy industry made him the primary financial backer of the whole Oak Island endeavor. So, it’s not clear if History is trying to signal to fans that the show is coming to an end–but it is clear that the length of their search is starting to affect the Lagina brothers.

Did Curse of Oak Island find the treasure? Spoilers suggest strongest evidence yet