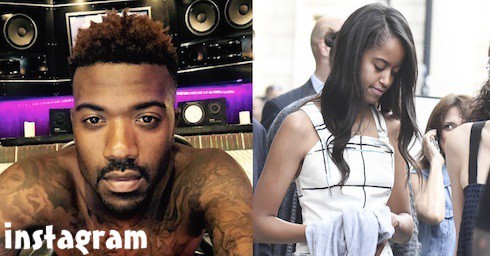 Ray J and Malia Obama have been at the center of a bizarre, secret text message-based rumor over the past few days, and it’s gotten so out of hand that Ray himself took to Instagram to address the stories. The Love & Hip Hop Hollywood star, 35 had reportedly been messaging Malia Obama, 18 (and the daughter of the current US president) in an attempt to hook up, or get together on the DL, or some such.

It’s actually not been made clear what Ray J was supposed to be angling for by sending a girl half his age, who has round-the-clock Secret Service protection for at least five more months, mystery texts the week before he gets married. TMZ Hip Hop was among the first to take credit for the story; according to their angle, President Obama was so incensed when the CIA’s “top Internet Security team” found messages from Ray J in Malia’s DMs that he dropped the following bomb:

“ONE PHONE CALL AND YOU’RE DONE LIKE YOUR CAREER, DON’T FORGET IM FROM CHICAGO I’LL TAKE YOU OUTSIDE AND F*CK YOU IN THE STREET!”

(It probably goes without saying that the caps are all TMZ’s doing.)

Needless to say, this story took off–in large part because of how over-the-top ridiculous it is. Things got so heated that Ray J–who, by his own admission, “never address[es] the BS”–decided he had to make an exception in this case. He took to Instagram to issue the following statement:

Had to address this!

Come on, man. Why y’all always trying to bring me down? I’m positive; I’m gettin’ married on Friday; like, what the hell would I be doin doin’ anything like that? Anything reckless, anything stupid; like, please. Anything y’all read like that, it ain’t true. Let me be positive; you know; lemme just, you know, be with my girl….I addressed this ’cause I didn’t want any other dumb stuff comin’ up at the same time we’re tryin’ to get married….I mean, we good. It’s all love, but….All that extra sh!t, please, man. I ain’t on that. Love!