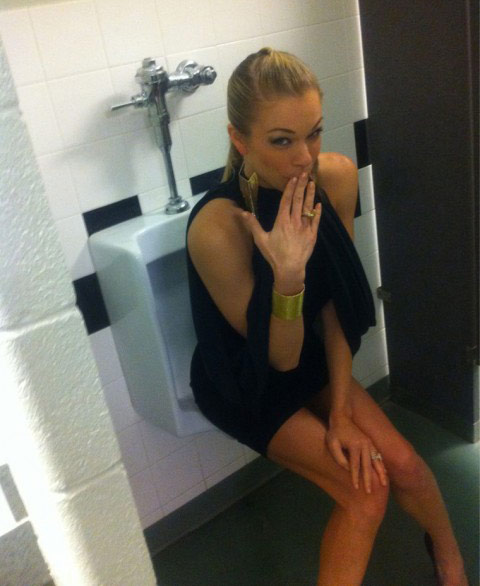 Country singer LeAnn Rimes’ life is like an open book, or at least an open, never ending Twitter thread of randomness. The girl is a flat out celeb Twitterholic and has been up to her usual tricks in probably sharing a little too much. I’m gonna try to sum it all up for you here in a big ol’ what’s up with LeAnn post.

I reckon I’ll get the above tweeted image out of the way first. She posted this gem when she discovered recently that her dressing room had no, “lady toilet.”

“Only a urinal, no lady toilet in my dressing room… hysterical!”

That was crappy of that facility I say!

Moving on from that R Kellified themed pic to her latest music release which is bringing in some good reviews from critics. The title is Lady & Gentleman and it’s a wonderful concept of having classic male sung songs performed from a female perspective. There’s a reason why we all know who LeAnn is and it’s her ridiculously powerful pipes. She worked on the album with Vince Gill and the results are great in my opinion.

Now when I say classic I mean Kris Kristofferson’s “Help Me Make It Through the Night, Merle Haggard’s “Tonight the Bottle let Me Down” and even George Jones’ “He Stopped Loving Her Today.” I don’t care who you are, to even attempt to go after all those songs and not make most critics cringe is a hell of an accomplishment. And hey, the CD also makes for good pasties according to LeAnn! 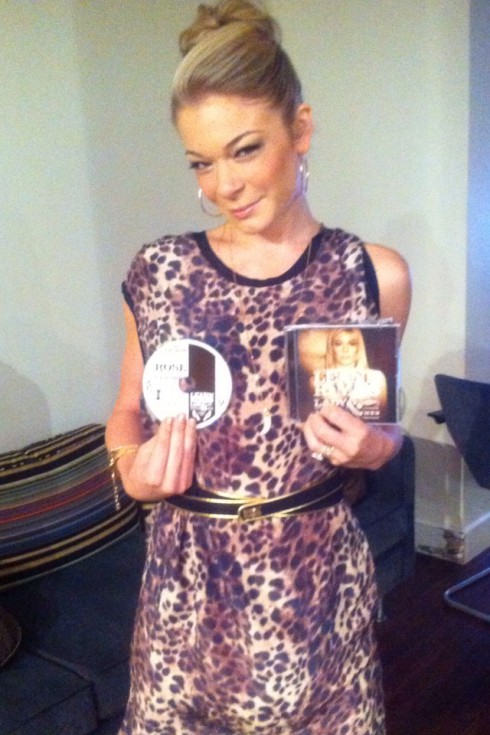 Here’s a version of her wonderful take on “Help Me Make It Through the Night.”

Next up is her situation with her marriage to actor Eddie Cibrian and her views on the relationship with the kids he shares with ex and Real Housewives of Beverly Hills cast member Brandi Glanville. She’s addressed this before but felt inclined to blog about it recently. She wrote:

“I have a very good understanding of being a child of a blended family because of my upbringing, and I’m now blindly but optimistically navigating my way through the blended family mom role,” she explains. “A family is a family. In my eyes. There’s no ‘step’ about it.” She added, “Eddie has always encouraged me to look at us as a family, and a part of our family are the two beautiful boys that we share with their mother and hopefully one day another wonderful man.”

That last part comes across as a Brandi zing doesn’t it? Well she did give Glanville her momma props in the post:

“One thing that I know is, I will never replace their mother,” Rimes adds. “I would never try. I will however love them with all I have and do everything in my power to help raise them in a loving, safe and proper environment.”

And last on this Rimes agenda is a recent appearance on Ellen in which she likened the criticism she’s received about her thin new frame to that of bullying. Ellen flat out asked her if she was anorexic or bulimic. LeAnn had the following to say:

“No, I am not but I do feel like the press … they’ve been very irresponsible.” She added, “Calling a lot of people fat or anorexic or bulimic or whatever it may be, it just seems like bullying now,” Rimes said, “Instead of really taking these diseases seriously that a lot of people are going through.”

Man, that’s a lot of LeAnn info right there.