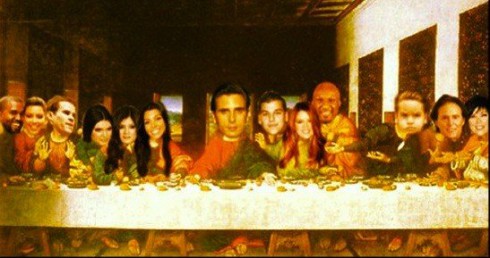 Perhaps as an answer to his brother-in-law Kanye West’s Yeezus album, Scott Disick posted a photo on instagram earlier today of Leonardo da Vinci’s famous painting of “The Last Supper” with the heads of Jesus and His disciples replaced by members (and one former member) of the Kardashian family. Scott’s visage replaces that of Jesus Christ’s and the picture was reportedly accompanied by the words, “Bow down.”

Disick (or should we call him “Sceezus” now?) later deleted the photo from his instagram account (which is under the name “letthelordbewithyou” by the way), but of course not before it made the rounds online, stirring up quite a bit of controversy.

In addition to the rather unsettling notion of Jesus being replaced by Scott, the photo also oddly features one of Kim Kardashian’s ex husbands — Kris Humphries! Oh, and some of the headier internet observers have pointed out that it seemed a peculiar choice to have Kendall Jenner replace Jesus’s eventual betrayer Judas Iscariot — I believe most thought Scott would have chosen matriarch Kris Jenner for that role.

Since there is about a 6% chance that there was a great deal of thought put into which Kardashian replaced which apostle, I decided to create a little guide and include a key indicating which Kardashian (or Jenner, or West, or Humphries) is which disciple.

Here is Scott Disick’s “Last Supper” picture followed by Leonardo’s original painting with numbers under each of the figures in each of the paintings. Underneath the photos is a list of who is who: 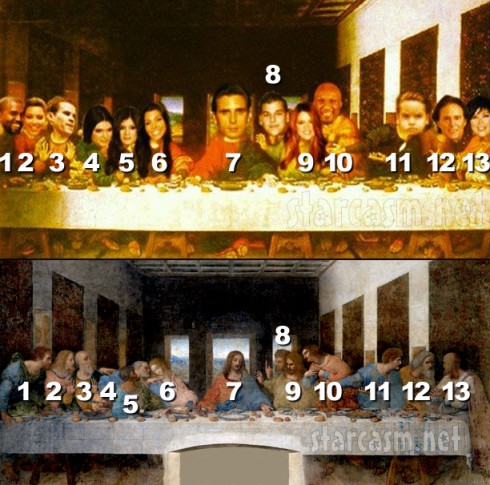 * Being the diligent celebrity blogger and art historian that I am, I should point out that the Kardashian “Last Supper” image shared by Scott Disick is actually just an instagramatized version of a photo posted on the “Keeping Up With Scott” Tumblr account a year ago, which would explain the inclusion of Kris Humphries.

* Oh, it should also be noted that Scott Disick has claimed in the past that he doesn’t have an instagram account:

For the record I do not have an Instagram account, people keep asking me if I do, there must be a fake one with my name

However, not only would his more than 2 million followers beg to differ, so would the mother of his child, Kourtney Kardashian, who often tags the account when she posts photos of Scott — including one as recent as this past Friday.

Lamar Odom update: He orders Khloe Kardashian to ‘Get out’ following hospital drama

PHOTOS Kim Kardashian without her wedding or engagement ring at LAX