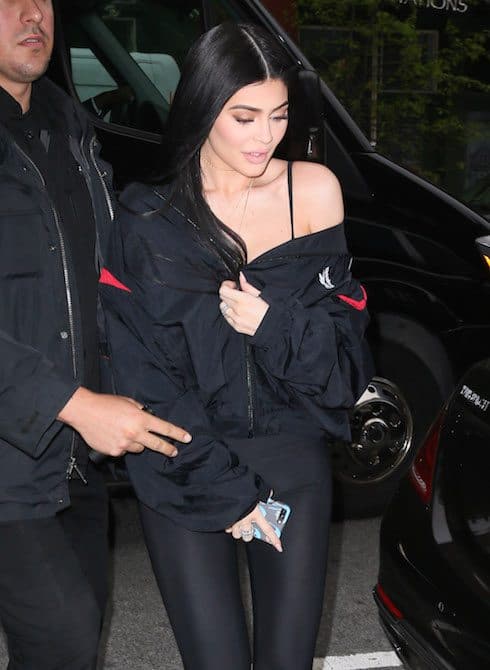 The youngest Kardashian is said to be nearing the very end of her pregnancy, but new reports of Kylie Jenner pregnant with Travis Scott’s baby also claim that Kylie is completely “miserable” — and that Travis believes he’ll be a terrible father. Of course, there’s more than a little bit of tabloid manipulation at work with these reports, but the general impression is that all is not well in Kylie’s world.

Ever since the now-infamous rumor that Kylie and her baby bump were spotted at a Beverly Hills CVS, all Kylie Jenner pregnancy gossip has trended negative. Those reports culminated with a Life & Style article alleging that pregnancy “has been hell” for Kylie, 19, who’s also “never been more miserable.” (Though, to be fair, Kylie Jenner has to have a very different definition of “miserable” than the rest of us.)

According to L&S, Kylie is “crying every day,” and “thought having a baby would be a dream come true.” But it’s actually been the opposite, as a second anonymous source explained:

Kylie feels fat and frumpy. She’s gained 45 to 50 pounds, and although she knows this is natural for someone who is pregnant, she doesn’t want the world to see her looking bigger. She feels huge compared to her sisters Kim, Kourtney, Kendall — and even Khloé….[Kylie is] spending money like water. She’s bored being stuck at home and is buying anything and everything because she has nothing else to do. Over the past few months she’s blown millions of dollars on herself and the baby.

So proud of you @kyliejenner! Your work ethic is second to none! #repost @thelovemagazine @kyliejenner by @kendalljenner for #love19 ? “‘It’s estimated that in the next few years you could have the biggest beauty brand in the world,’ says Kris to Kylie, a moment that might put a lump in the throat of any mother. ‘How do you think that phenomenon happened?’ Kylie pauses again. She’s careful with what she lets on to mom. ‘I think truly, I put a lot of hard work into this,’ she replies. ‘It’s not like I’m doing this to make money. I don’t even think about that part. This is just something authentic to me.’” Fashion Editor @stevemorriss01 Make up @namvo Hair @andrewfitzsimons Interview @krisjenner Words @paulflynn

What else is Kylie doing to cope? Short of lining up diva-tastic delivery room demands at Cedars-Sinai Hospital, she’s apparently taking more and more solace in the arms (and comfy home) of mom Kris Jenner.

What’s most interesting about that report, though, is the way it’s being interpreted by some of the internet’s more fervent Kylie watchers. Both Seventeen and BET took People’s claim that Kylie has all but moved back in with her mother to mean that she’s either “freaked out” or outright “scared to give birth.”

But the original article’s specifics — which do come from an anonymous insider, so take that for whatever you think it’s worth — mostly paint a picture of a cautious, media-wary first-time mom. “At first, [Kylie] only wants Kris and her sisters to help with the baby,” said People’s source. “She is worried about new people around the baby.”

Beyond that, Kylie is supposedly contending with more drama involving baby daddy Travis Scott. Second only to stories of Kylie Jenner pregnant with Travis Scott’s baby are reports that Travis and Kylie are either on the rocks or broken up entirely. The last big story on that front came early in the new year, after Travis had reportedly dumped Kylie on Christmas Eve.

Of course, those reports turned out to be false (or the pair did split and then got back together almost immediately, Tyga-style, which amounts to the same thing). But Hollywood Life is taking a different tack of late. They write that Travis appears to be trying to downplay expectations that he’ll be a good father to he and Kylie’s little girl, thanks to his “red-hot” career, as well as the fact that both he and Kylie are rich:

Kylie’s pregnancy wasn’t planned, and although he’s excited about the baby, Travis isn’t planning on radically altering his life, at all….Travis is loving life right now—his career is red hot and he’s raking in the money. This is the lifestyle that Travis has always wanted–performing in front of thousands of screaming fans, private jets, champagne, parties—he’s really living the high life. When Kylie got pregnant Travis never pretended he was going to be the model dad, he’s made it clear that she won’t want for money at all, but he’s never intended to put his career on ice so he can just sit around at home with her night after night.

That quote is pretty hilarious, given that Kylie is still on track to become a billionaire before she turns 21. Also because it suggests that Kylie will be the one “sitting around at home” with the kid. Still, no amount of money can substitute for a parent who’s both loving and attentive. At this point, the best Kylie and Travis’ unborn baby can hope for might be a trio of really sweet, round-the-clock nannies — the kind who turn down Kris’ repeated attempts at signing them up for their own reality show so they can raise their employer’s kid in peace.