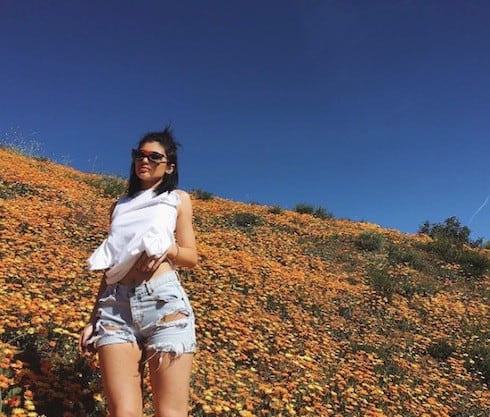 Are Kylie Jenner and French Montana more than just friends? According to several new reports, the two might be dating in secret, thanks to what’s said to be Kylie’s ongoing frustration with long-time boyfriend Tyga. Though previous reports have suggested that Tyga’s fooled around behind Kylie’s back–and they’ve led to some nasty allegations, like the time Tyga was accused of hitting on a 14-year-old girl over Instagram–this is the first time Kylie’s name has come up in connection with someone else.

An Inquisitr report claims that Kylie Jenner and French Montana have been getting especially cozy over the last few weeks, ever since Kylie and Tyga left the Kardashian ski vacation early due to a fight they’d had over Rob Kardashian’s engagement to Blac Chyna. Though there’s no direct evidence of anything going on between Kylie and French, the suggestion appears to have something to with Kylie being “livid” over the engagement.

Further fueling the claims is a series of Kylie’s Snapchat uploads over the past few days, several of which involve sitting on French’s lap in a manner that, judging by the comments, did not go unnoticed.

Me and the wave queen #family @kyliejenner ???

Tyga, who not long ago blamed the devil for the drama between himself and Kylie, is not having a good few days: whether or not reports of Kylie Jenner and French Montana are accurate,the 26-year-old occasional rapper still has to contend with an apparent $350,000 bill to a credit company. According to the company, Tyga has yet to make a payment on his 2013 Lamborghini Aventador, and a date with the repo man may be in order.

Of course, it wouldn’t be a Kardashian family rumor mill update without at least one major conflict–which is why it’s worth pointing out that a Page Six report alleges a romantic entanglement between French Montana and former flame Khloe Kardashian. According to their insider, the two”are still hooking up but keeping it totally under the radar,” and “were even supposed to meet Kylie” for a recent dinner engagement before “bailing” to be with each other instead.

However, the report stressed that Khloe isn’t interested in anything more than hookups. “Khloé knows French is a player,” the source explained, “and [she] doesn’t want to get involved with him in that way again right now.”