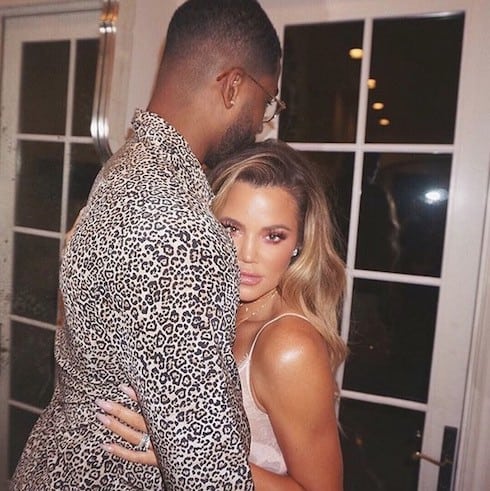 We’re teased photos with Khloe Kardashian’s baby bump several times a week, but the first-time mom refuses to give up the goods–which is exactly how she wants it. According to a new report, Khloe has fallen in love with the practice of trolling her fans (and her many observers in the media) over baby bump pics, especially since the Kardashian family plan is to keep evidence of its three simultaneous pregnancies hidden for as long as possible.

The take, which comes from Hollywood Life, quotes an anonymous insider who claims that Khloe “loves keeping everyone guessing” about whether or not she actually is pregnant–á la little sister Kylie Jenner, whose trolling ways are well-documented. And hiding what may or may not be a Khloe Kardashian’s baby bump is the easiest way the 33-year-old to do so.

“Khloe is getting so much attention with this pregnancy guessing game,” said the insider, [“but] there’s not any real motivation to confirm it yet. She’s having fun teasing people and keeping them guessing. The big payoff is that it’s helping build lots of interest for the show, but it’s also fun for her. She’s having fun messing with people.”

Indeed, Keeping Up With The Kardashians‘ ratings have been on a steady decline for several years–and that trend has continued with Season 14, despite interest in the family’s uterine status at an all-time high. So it’s entirely possible that “helping build lots of interest for the show” is part of Khloe Kardashian’s baby bump end game.

But it’s just as important to remember Khloe’s other business interests After all, in the past six weeks alone, we’ve seen two separate alleged baby bump teases on Instagram…

❥ ? JUST DROPPED!! One of my favorite minis!! The sexiest waxed leather-like @goodamerican denim!! You'll be rocking these all season long ladies ??? Get yours now on goodamerican.com #GoodSquad #GoodAmerican ❥ ?

You guys are going to love our new @goodamerican velour sweats and velvet bodysuits!! You can mix and match colors (I'm obsessed with the burgundy!!) or team a bodysuit with matching sweats for a super cute look. These are SO comfy for the holidays. Available now on GoodAmerican.com

…and both of those were tied directly to her Good American clothing line. In addition, though baseless reports had stated outright that Khloe is expecting a boy, several of Khloe’s recent social media updates have internet oracles wondering whether she’s actually pregnant with a girl. (Which would mean the current crop of Kardashian kids are all female.)

And let’s not forget the persistent rumor–it’s still not debunked!–that Khloe plans to induce labor during the 2018 NBA All-Star Game. Tristan will already have that week off, the logic goes–plus he’ll be at (his new) home in Los Angeles, and Khloe is due in mid-February anyway. As far as attention-grabbing publicity stunts go, this one certainly seems Kardashian-worthy.