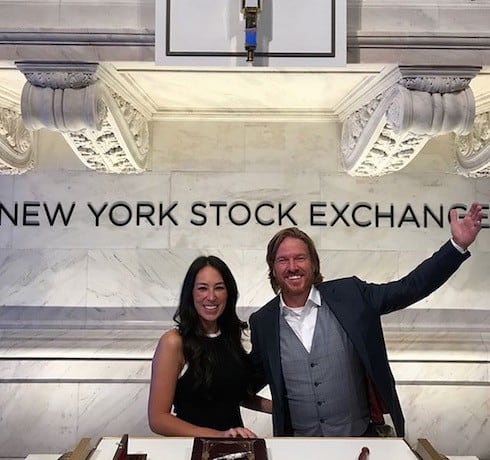 As Chip and Joanna Gaines have become more popular, so too have the many absurd rumors and outright fake stories about their plans. Case in point: ever since they announced that Fixer Upper Season 5 would be their last, searches for the question “Are Chip and Joanna leaving Waco?” have spiked–despite the fact that the couple specifically said they intend to stay.

So, in honor of Fixer Upper‘s fifth season premiere later this week, we’ve put together a handy debunking roundup. As best as we can tell, the following are the top five rumors related to Fixer Upper and to Chip and Joanna’s plans after the show. Rest easy! It’s all good news. (Except, of course, for the end of the show.) And if there’s a major rumor you want debunked, let us know in the comments below.

Are Chip and Joanna leaving Waco?
Nope! Not happening. As they put it in their farewell announcement,

And the couple recently took things one step further, dispatching an official Magnolia rep to set the record even straighter via a writeup in People. “Any report that Chip and Joanna have sold their farmhouse is completely untrue,” the rep said. “They have not sold their home and they do not have any plans to do so.” (The feature goes on to explain that “The Gaines recently moved their property line to match their fence line—this is not uncommon and is a matter of public record.”)

We love this place. It's home, which means more to us than anything!Remember if it didn't come directly from us it's probably NOT true https://t.co/KbqMdyWbB1

Are Chip and Joanna leaving Texas?
Well, they *couldn’t* leave Texas without leaving Waco, so the first question kind of debunks the second 🙂 But this related query has also been getting a lot of attention. And, as we’ve reported before, the answer is once again a hearty and heartfelt No. Chip and Joanna have four kids in school in Texas, and a boatload of family nearby–including Joanna’s sister and her seven (7!) children, all of whom recently moved back.

Joanna and Chip did recently jet off to Italy for a well-deserved vacation, following the final Fixer Upper reveal. It’s possible that Joanna’s Instagram updates are fueling the rumors–but relax; the Gainses are only visiting Italy.

We both slept for 15 hours and missed breakfast, lunch, and an afternoon of shopping with friends, but that rest felt good! Florence, you're beautiful ❤️

A beautiful moment at the Vatican today

Are Chip and Joanna getting divorced?
Nope! Not happening. We’ve also reported on this rumor before–Joanna and Chip are as lovey-dovey as ever. In fact, one of the main reasons that the Gainses decided to pull the plug on Fixer Upper was so they could spend more time with their children, their extended family-and each other.

You're my cup of tea @joannagaines! All new episode of #fixerupper tonight at 9/8p CT on HGTV. #season5iscoming ?: @matsumoto818

Was Fixer Upper canceled?
This is actually a more complicated question in light of the retirement announcement, simply because the announcement is so often misconstrued. While Fixer Upper is ending, the show wasn’t canceled by HGTV–Chip and Joanna are stepping away voluntarily. In fact, as we’ve explained before, Fixer Upper has the highest ratings of any show on HGTV, and regularly challenges for the highest viewership on cable, period. Barring a major scandal, there’s simply no way any network would ever cancel a show as popular as that.

Chip himself took to Twitter to debunk this rumor, shortly before Season 4 aired:

No ma'am.. Not sure where they got this?? #justGettingStarted! https://t.co/ONuakKUL7b

yes ma'am! We are filming as we tweet! S4isComing.. https://t.co/GWnbMKQ3XU

However, there is one Fixer Upper cancelation rumor you might actually want to pay attention to. Scripps Networks Interactive, which owns Fixer Upper, was recently purchased by Discovery. The sale is still being finalized, and is expected to go through sometime in 2018. And the current gossip is that Chip and Joanna, who’d wanted out of their contract with HGTV, may be willing to return to TV with new episodes of Fixer Upper in 2019, provided that their new bosses are more amenable to their terms.

Is Joanna Gaines quitting Magnolia Homes to launch her own line of cosmetics?
This is one of the oldest (and most sexist) Fixer Upper rumors out there. We’ve debunked it, and Joanna has taken it to task at least once–but it won’t die, and so we address it here. The answer is once again simple: Nope. No. Not happening! Joanna is a business dynamo for sure; she does not have her own line of cosmetics, nor has she expressed interest in developing one.

As the woman herself put it, “Don’t believe everything you read“:

At the end of the day, we’ve learned it’s impossible to control all the information that’s out there. We care about you guys, and the best way we can protect you from false information is to direct you to our official channels. Follow our social media accounts (Find those here, here and here), sign up for our newsletter, and keep up with our blog. These are the spots where we’ll tell you about our new partnerships, projects, and even personal news. Always remember: if you’re reading big, exciting news about us, and we did not confirm it on our official sites, then proceed with caution.

We are so thankful for your support—we wouldn’t be here without you! And just in case you were wondering, YES! We are currently filming season 5 of the show. No! I am not getting into the business of facial creams. And No! We are not expecting baby #5. And no worries, believing some of these stories happens to the best of us.

Oh–and Joanna’s not pregnant, either 😉

(Photo credits: Are Chip and Joanna leaving Waco via Instagram)

Does the Vanderpump Rules cast really work at SUR?