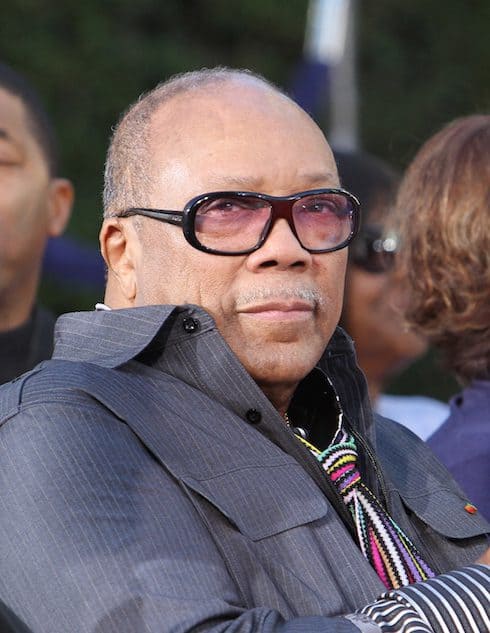 VERY SMART BROTHAS – Do yourself a favor and check out 85-year-old Quincy Jones’ delightfully batsh!t new interview, in which he makes the following claims: The Beatles sucked; Michael Jackson stole songs; Marlon Brando and Richard Pryor had sex; the mafia killed JFK; and Ivanka Trump, “wrong father” or not, has “the most beautiful legs [he] ever saw”

LAINEY GOSSIP – Tom Hardy is completely unf*ckwithable, but the just-released trailer for Venom is kind of a hot mess. Instead of yet another comic book super / anti-hero movie, can Tom Hardy star in a movie about a man who rescues puppies from inbound natural disasters and helps them through their puppy PTSD with the power of cuddles? It would be like We Bought A Zoo meets Castaway. But fun!

REALITY TEA – Ramona Singer’s ex-husband Mario tried to evict his former mistress Kasey Dexter from their Boca Raton apartment, then had to call the cops to get her to actually leave. The next season of RHONY is currently filming, so some version of this may make it onto the show

JEZEBEL – Bill Cosby’s legal team is trying to disallow testimony from new accusers in Cosby’s sexual assault case, claiming that the women’s stories would be “highly prejudicial” for the jury. Cue facepalm

VOX – Jeff Sessions is afraid of marijuana the way Abe Simpson is afraid of skateboards. It’s almost cute until you remember that the drug policies he’s pushing were outdated 20 years ago, meaning Sessions is the political equivalent of the Fuller House reboot — something nobody really asked for and, now that they’ve seen it, nobody really wants

UPROXX – Last year, SteelHouse CEO Mark Douglas gave everyone in his company a three-day weekend in every month that didn’t already have one and threw in a $2,000 yearly vacation allowance. Since then, employee happiness and productivity have skyrocketed, since it turns out people really do like money and time off. #MakeAmericaEuropeForOnce

DLISTED – There are currently three Hollywood movies about Charles Manson and the Manson Family murders in production right now. Since you’re probably going to choose which one to care about based on who’s in it, just know that of them will be directed by Quentin Tarantino; one of them stars Matt “Doctor Who” Smith; and one of them will feature Hilary Duff playing Sharon Tate in the lead

CELEBITCHY – And speaking of Hilary Duff, Sharon Tate’s sister Debra is not pleased with Duff for taking the part of Sharon in the third Manson-related film, which is currently entitled The Haunting of Sharon Tate. Among the things Debra said: “It doesn’t matter who it is acting in it – it’s just tasteless. It’s classless how everyone is rushing to release something for the 50th anniversary of this horrific event.”

CELEBUZZ – Finally, in vaguely Manson-adjacent news, Mariah Carey’s sister Alison claims their mother raised them in a cult and taught them “satanic rituals” and that she and Mariah were “exposed to sexual activity and [animal] sacrifices” while growing up