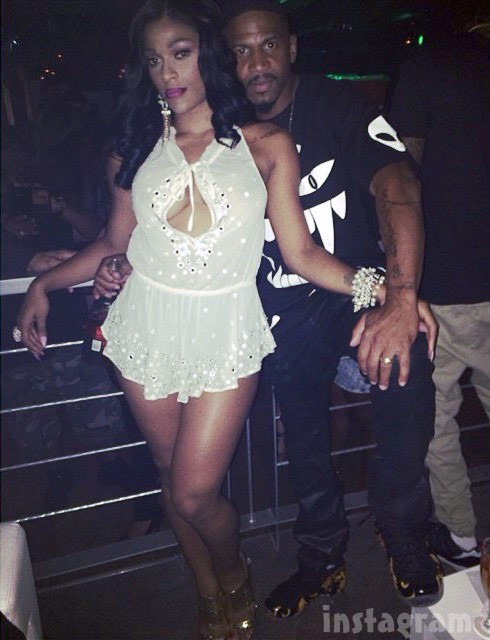 Joseline Hernandez and Stevie J were really and truly never a married couple–but Stevie is definitely totally the father of Joseline’s baby. That’s what the Puerto Rican princess claimed in an affadavit her attorneys recently filed against Stevie, accusing him of getting Joseline pregnant this past April and demanding satisfaction in the form of assigned paternity. Of course, the world remains unconvinced that Joseline is genuinely pregnant–and her latest pictures aren’t necessarily helping matters much.

A brand-new report from VH1, buttressed by court documents obtained by Bossip, reveals that Joseline claims two things: 1) That she and Stevie were never a legally married couple; and 2) That she and Stevie J had sex this past April, which led to Joseline’s current pregnancy. Previously, Stevie had denied the allegations–and the current rumor was that Young Dro was the baby’s father, and that he would be joining Joseline on Love & Hip Hop Atlanta Season 6. Now, though, Stevie will have to answer Joseline’s allegations in court.

In the meantime, Joseline’s Instagram updates continue to baffle her fans, many of whom seem convinced that she isn’t actually pregnant. Take, for instance, this recent video upload, in which Joseline appears much more pregnant than she has in any update so far:

A few minutes later, though, she shared this photo, in which she’s wearing the same outfit, but standing up instead of sitting down–and her baby bump looks considerably less prominent:

Whatever her uterine status, Joseline certainly sounds excited. She recently reminded fans that she has just over two months left before her due date:

RELATED ARTICLES: LHHATL Joseline Hernandez and Young Dro might be having a baby together after all

How many lovers has Charlie Sheen had since being diagnosed with HIV?