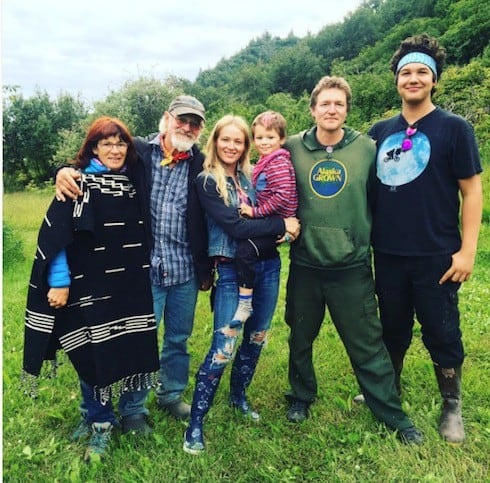 The Alaska The Last Frontier cast is now one bigger–and the new member is someone fans have been hoping for for six years: Jewel Kilcher, the family’s famous daughter, will return to Homer for Season 6! Discovery has just released the first trailer for the Kilcher family’s newest escapades, and Jewel herself has been sharing behind-the-scenes photos and video for weeks, so we have something of an idea of what to expect (namely, sing-alongs and truckloads of feel-good warmth) when Jewel’s episodes air.

First up, here’s the brand-new trailer, which promises–and delivers–surprises galore. From homesteading mishaps to hunting danger to the very real possibility of one family member not leaving the hospital alive, there’s no shortage of drama ahead:

“I grew up working cattle with my Dad,” explains Jewel, who was born in Salt Lake City and also lived in Provo UT before the Kilchers settled in Alaska. “I’m just really glad to be back.”

While Jewel has been back home since making it big in the music business, she returns to Homer somewhat regularly: in her own words, she returns as often as she can. But her appearance this year marks the first time she’s appeared on-camera as a member of the Alaska The Last Frontier cast.

And, Jewel’s her official Instagram account made very clear, both she and her son Kase had a great time!

Please don't watch unless you have a morbid sense of humor at a road kills expense…. Strong stomach advised. PS I need to question my taste on friends #AlaskanHumor #RoadKillHumor @atzlee @atzkilcher

Introducing Kase's first public performance! With me! We were at a friends house in Alaska and Kase decided to sing w me for our friends – I was so thrilled! The way he rocks back and forth murders me…. ???

It was so nice to be home with my family. It was so heart warming to see my son run wild and free in Alaska amongst his own tribe. My dad has come to visit us often down in the states, but other than that I have never had family- and seeing Kase just instantly take to cousins and nieces and nephews and grand children made my heart so happy. My dad built an entire imaginary town for Kase by ploughing trails through the brush , and he let Kase name the paths and they built secret forts and picked wild blueberries …. It was so lovely to see my son and my dad bond so much…. And to see Kase so relaxed and happy in nature , the way it was for me as a child. Nature soothes is and reminds us what it is to be human. Calm, content, fulfilled.

Want to fly over an Alaskan glacier with me?

My Alaskan family! Feels so good to be home !

Want to watch a male Coastal Brown Bear walk by closer to me than I ever thought I would let a bear get? #Alaska

Made it to Homer Alaska! My first time showing my son my home town! And we saw a bull moose just 5 min after being here

Jewel also shared a photo montage of her appearance on Good Morning Alaska with father Atz all the way back in 1981. (If you all of a sudden feel old because it seems like “Who Will Save Your Soul” was a mega-hit just a few years ago, you’re not alone.)

35 years ago today…. My dad @atzkilcher and I singing on Good Morning Alaska ….

Finally, as part of the ramp-up to her big Alaska The Last Frontier Season 6 debut, Jewel penned a lengthy reflection of her Alaskan years for the Wall Street Journal. You can read the piece in full by clicking here; the following is an excerpt of Jewel’s memories of childhood:

My father, Atz, and my mother Nedra, met in Homer and married. I was born in Salt Lake City. After my dad returned from Vietnam, he and my mom moved to Utah so he could study social work at Brigham Young University. After he graduated, we moved to Anchorage.

At first, we lived in a tiny two-bedroom apartment. Then my father built a larger, log-frame house near town with three bedrooms. I picked my own carpeting—pink shag.

Both of my parents were musical. They had a variety show in hotels for tourists, and I began singing with them on stage at age 5.

When I was 8, my parents divorced. It was traumatizing for my two brothers and me. My mom told my father she needed a break from being a mom. She kept the big house, while my dad and my brothers and me moved back to Homer. We lived in a one-room house behind my uncle’s machine shop. I slept in the closet.

Dad was under pressure to raise the three of us, so life was hard. I realized I needed a way to survive emotionally and turned to writing.

To make money, my dad and I sang in local taverns, which taught me to look out for myself. When I was in fifth grade, we moved to a saddle barn on the homestead where my father was raised. We didn’t have much, but I loved it there. We hauled water and raised livestock for food. Our outhouse had a better view than any mansion. When there’s that much natural beauty around you, it’s hard not to believe there’s goodness in the world.

Fans eager to see Jewel back at home with the Kilcher family don’t have long to wait: Alaska The Last Frontier Season 6 premieres with a two-hour episode Sunday, October 16, on Discovery.