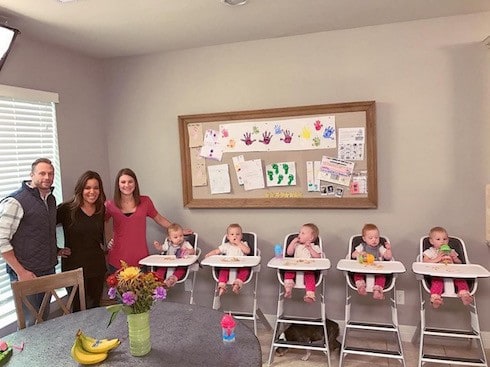 TLC Outdaughtered Season 2 is here, and the Busbys have returned with more on their plates than ever before…now that the quints are crawling! The new season is full of love, but the challenges of raising six kids, only one of whom can stand on her own, is starting to catch up with Adam and Danielle, who’ve never felt farther away from their families back in Louisiana. The Season 1 finale saw the family torn about whether to return to their families for childcare and moral support–or whether Adam should continue to pursue his career, in order to provide for his family all on his own.

Those tensions will continue throughout Outdaughtered Season 2, though, as we quickly learn, the Busby quints no longer have to sleep on he living room floor, thanks to their new home. Unfortunately, that’s only the first of their problems: Hazel becomes a cause for concern when she isn’t developing as quickly as her sisters; eye and ear infections are more the rule than the exception; and Danielle is in dire need of assistance. (Like she wasn’t already.) In fact, Danielle recently found 54 spare minutes to sit for an interview with the Extraordinary Moms podcast and describe her daily routine, among other things. One major component of her life? Keeping exercise a priority, no matter how difficult.

“I was very fitness-oriented before I had the babies, and I didn’t have a C-section when I had Blake, and so having a C-section and recovering was very different for me,” Danielle explained. “And, I was so tired, but there was something that I was just missing–of that peacefulness….I had to start back with the walking, which killed me, but I finally got to the point where I could run again….The fitness side of it is just such a de-stressor. Even if it was just fifteen minutes and I could just walk around the lake.”

Danielle and Jessica, the podcast’s host, also joke about playing Rock-Paper-Scissors with their spouses to see who has to watch the kids and who gets to go to the grocery store. “The grocery store, that was an outing,” Danielle laughs. “I mean, sometimes, still to this day, I go to the grocery store at, like, 9 PM. It’s just me! There’s no one here; I want to look at every aisle…”

And, when asked whether babies or moving toddlers are more difficult, Danielle had to consider every aspect of she and Adam’s parenting. “That’s hard to compare,” she says, “because it’s so different…that phase where they were eating all day and night was super-hard….But then, guess what, you’ve got to start feeding them food, feeding them solids. And then they start crawling….I feel like it was definitely harder back then,” Danielle concludes, “because it was all so new.

“But,” she warns, “let me just tell you, like, the toddler phase of, like, crawling–once they get to the walking, walking entitles them to feel like they can crawl over things. It’s not like you’re just, ‘Oh, I see you over there,’ it’s like, ‘Wait, where are you?’ They all move. You’ll see all of that on the show,” she adds. (You can check out Danielle’s full appearance on the Extraordinary Moms podcast here.)

We do know that Danielle and Adam had all hands on deck for their recent trip to New York City–the girls’ first time on a plane!–to promote OutDaughtered on Good Morning America. Thanks to the magic of social media, we also have a photo documentary of that trip–and it looks like mom and dad might have actually gotten a date night all to themselves?! Check the pics!

Trying to pack and plan coordinating outfits for 6 kids for 6 days in NY…. #help ?? #thisistakingforever #itsabuzzworld

Lots of loving extra hands this week while we are on NEW YORK!!!!! Busby's take on the Big Apple #itsabuzzworld #outdaughtered #season2

What's a trip to New York without a picture with New York's Finest? #QuintsTakeOverNYC #OUtDaughtered #season2

Hanging out with @michaelyo today for @theinsider . The interview will be on tomorrow on CBS. #OutDaughtered #quintstakeovernyc #Season2

Ohhhh Blaykers ? … she got to see the Enchanted Rose this morning at GMA ??. We are so excited about the new Beauty and the Beast #mommysfavorite #beautyandthebeast #gma

Danielle confirmed for GMA that everybody has to more or less keep the same schedule. “They sleep and we sleep, so we’re happy,” she laughed. “The hardest thing is just literally the logistics of doing anything, like simply putting [them] in the stroller, getting in the car,” she added. “I mean it takes about 20, 25 minutes just to get all of the babies in their car seats strapped in. Getting up, going to the grocery store, it’s stuff like that that is just so complicated.”

RELATED ARTICLE: Are quintuplets possible naturally? How did the Busbys from TLC’s Outdaughtered get quintuplets?

PHOTOS Alaska The Last Frontier homestead location: How far do the Kilchers live from Homer?