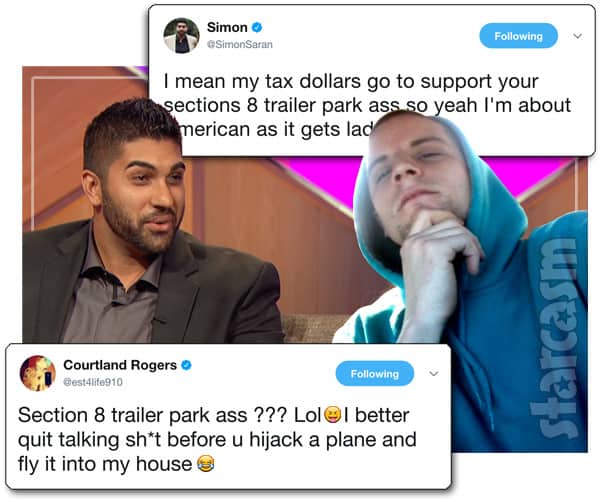 It was a battle of the Teen Mom exes this week after Farrah Abraham’s former love and business interest Simon Saran shared his thoughts on the unjustified condemnation of Donald Trump on Twitter, and Jenelle Evans’ ex-husband Corutland Rogers decided to have an elevated discussion with him about the current state of racial prejudice in America. Well, something like that.

“So now people are blaming @realDonaldTrump for what happened in vegas? Wow!” Simon tweeted, before going back and forth with a few fans about gun control. “I’ve never seen so many racist Americans hate a white man and blame every event that happens on him,” he later added. “Sorry dude it sucks @realDonaldTrump”

That last tweet was what drew a response from Courtland, who seemed to have taken offense to what Simon said. “Who are u to call any American racist ??” he asked. “Are u even American ? ‘Hate a white man’ what kind of racist sh*t is that?? Smh.”

Simon was quick on the draw as usual with his comeback: “I mean my tax dollars go to support your sections 8 trailer park ass so yeah I’m about American as it gets lady.”

(It seems like every post I do about Simon Saran tweeting needs a Ron Burgundy “Well, that escalated quickly!” meme.)

Courtland kept the debate alive by offering up his refutation: “Section 8 trailer park ass ??? Lol ? I better quit talking sh*t before u hijack a plane and fly it into my house ?.”

F*ck boys get Tats of the caddy on their necks, I got them as daily drivers. It's a platinum type thing. You just a fuggazi #teenmomog pic.twitter.com/UO4BwGGwPG

Just in case you are not up on your Teen Mom 2 Art History, here’s Courtland’s Adam’s apple Caddy tat: 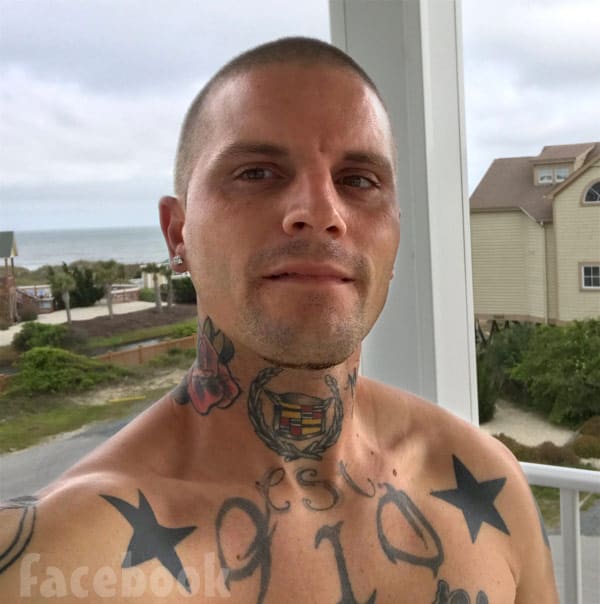 Unless there were some deleted tweets that I missed, I think that is pretty much it for Simon and Courtland’s back and forth.

Meanwhile, in other Courtland and Simon news…

Is it possible that Courtland went after Simon because Courtland has signed up with #TeamDebzOG? Courtland recently posted his invitation to the wedding of Farrah’s mom Debra Danielsen and her fiancé Dr. David Merz and wrote: “Got my invitation today ????? and I cannot waitttttttt to get to be a part of something so special in your life @ddanielsen.” I am certainly curious to know what kind of connection Debra has with Courtland that would merit an invitation to her wedding. (???) And, judging from the way Courtland talks, he plans on being there. (Too bad Simon won’t be.)

Speaking of growing families and whatnot, Courtland recently revealed on Facebook that he will soon be a dad again. Here is his Facebook announcement posted on Thursday:

F*ck being single .. that sh!ts sucks… when u find a down ass chic to b on your team u better never let her go… I found one and she is cool , sexy , and she is on my team so much that we are proud to announce that we will b having a new member of our team the end of March and I cannot freaking wait. It’s so badass being able to go to the OBGYN appoints and seeing the heartbeat and knowing that in about 5 more months i will have my 2nd child … my girlfriend knows who she is and the coolest part is that she doesn’t want media attention or fame from the teen mom/MTV sh!t … and that my friends …. is some real sh!t … ❤️??

“I cannot wait for the 25th to get here so we can find out if it’s a boy or a girl,” Courtland tweeted on Thursday. “I’m so freaking excited.” On Wednesday, Courtland’s girlfriend Lindsey revealed that she is currently 15 weeks along.

Clearly, Courtland and Simon are living completely different lives. But, they do share one passion: a seething hatred for the Teen Mom shows! Courtland articulated his disdain with a post back in early July:

Fu&k Teen Mom and Everything that comes with it ….my whole entire life is on the internet for ANYONE to see and that just SUCKS . Like all someone has to do is Google my name and they will see my whole entire life . I never NEVER knew that all of this came with it when I got with Jenelle I can’t take it man everyone looks at me from what they read and believe what they read and when it’s all said and done more than half of it is NOT true .. but they believe it cause they don’t know me and that’s the thing I am trying to express right now is that THEY DONT KNOW ME. half the people that hate if they would come and hang out with me for a day their hate would turn to love because im a great f**king person and I k know my worth and that’s what matters but still like people look at me from what they read not from what they know and I HATE IT.. SO ONCE AGAIN I WILL SAY IT … FU&K TEEN MOM AND EVERYTHING THAT COMES WITH IT.. OK WELL THAT IS ALL GOODBYE

Oddly, Courtland was seen filming for some sort of show just a week prior to his diatribe above. He and Taylor Lewis, the mother of his six-year-old daughter, were shooting together in a photo posted by Courtland on Facebook and Twitter:

Who would watch a reality show with me and my baby momma on it ????????? pic.twitter.com/f2IyO3EwrJ

“Who would watch a reality show with me and my baby momma on it?” Courtland asked. (Hmmmm… I wonder if there was/is a “Being Courtland” special in the works?)

Speaking of MTV “Being…” specials, the mythical “Being Simon” special is apparently actually going to air! According to TV listings, “Being Simon” will air Wednesday, October 13 at 9/8c on MTV. The one-sentence description reads: “Simon juggles his career, friends and nightlife, but wants to partner with Farrah to flip houses.”

The footage was shot roughly six months ago when Farrah and Simon were officially “on again.” You might recall Simon confirming that it was filmed during his epic Twitter spat with Farrah:

Thanks2me you got your own "Being Simon " special LMAO Simon wants to be on tv so much ! F*ckin joke! Be thankful not hateful @MTV @TeenMom

This will be the third week in a row that MTV has aired one of these Teen Mom spin-off specials. “Being Simon” follows “Being Nathan” and “Being Vee” and joins a quickly growing list of subjects that includes Barbara “Babs” Evans, Butch Baltierra, and Debra Danielsen. I suppose I could complain about them overdoing it a bit, but until I see “Being Kieffer,” they are not done.

Wow, this was just going to be a post about a brief Twitter exchange between Simon and Courtland. Sometimes as a blogger you need to know when to say “when.” But, I couldn’t not share all this other info!

OK, on with my Friday night now… Have a great weekend y’all!