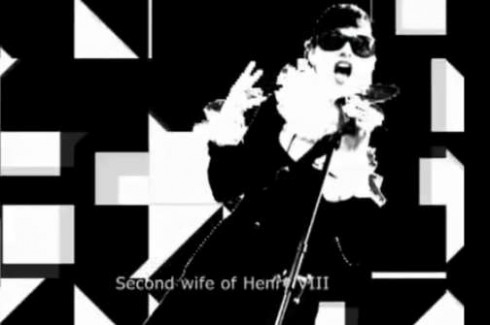 Armed with nothing but a solid knowledge of history, a decent singing voice, and heaping doses of creativity, a group of history teachers have finally found a way to properly instruct children (and adults.)

Going by the handle “historyteachers” on YouTube, these educators do treatments of popular pop songs with the lyrics changed to history facts. Combined with some really clever, often funny and beautiful graphics, and cuts to the pretty lead singer, and we’ve got ourselves some really fun learning.

These folks are seriously good and should tour, and even get a Glee-like television treatment.

Here are a few of our favorites, followed by the full track list. To see the rest, click here.

I wish I could publish all 48, but that would be a bit overall. I think I love them all, though.

Copernicus – “Because” by the Beatles

The Borgia – “I Know What Boys Like” by The Waitresses

The Canterbury Tales – “California Dreamin'” by The Mamas and The Papas

Iceman – “Taxman” by The Beatles

Joan of Arce – “Seven Nation Army” by The White Stripes

King Tut – “Walking on the Sun” by Smash Mouth

Nefertiti – “Kiss Them For Me” by Siouxsie

Charlemagne – “Call Me” by Blondie

Macedonia – “My Sharona” by The Knack

Mary, Queen of Scots – “Jenny from the Block” by Jennifer Lopez

Elizabeth I – “She’s Not There” by The Zombies

Mummification – “(Good Riddance) The Time of Your Life” – by Green Day

Battle of Agincourt – “As Tears Go By” by Marianne Faithful

Attila the Hun – “Here Comes the Rain” by Eurythmics

Gladiator – “You Know I’m No Good” by Amy Winehouse

The Odyseey – “Across the Universe” by The Beatles

Renaissance Man – “Blister in the Sun” by The Violent Femmes

The Olmecs – “September Girls” by The Bangles

The Divine Comedy – “Rapture” by Blondie

Anne Boleyn  – “Girl” by The Beatles

Eleanor of Aquitane – “Happy Ever After” by Julia Fordham

The Crusades – “Eyes Without a Face” by Billy Idol

The Spanish Inquisition – “(Keep Feeling) Fascination” by The Human League

Thanks to Jezebel for finding these gems!

Britney Spears’ new music video “Hold it Against Me” is a comment on fame, commercialization