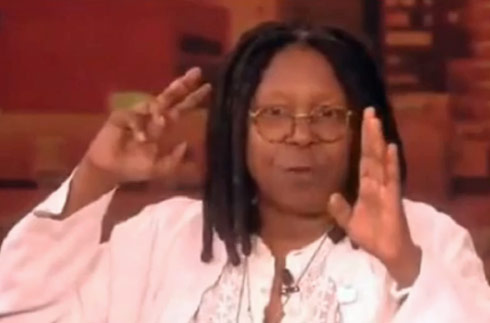 The controversy involving NFL football player Ray Rice’s suspension and then ESPN talking head Stephen A. Smith getting suspended for his views on the matter have opened up an interesting debate on the long-existing idea that “a man should never hit a woman.”

Ray Rice got what many felt was too short of a ban (2 games) after he was indicted on third-degree aggravated assault of his now wife. Stephen A. Smith was recently suspended by ESPN for one week for stating on air that he felt that women should make sure not to do anything to provoke such an attack.

The topic was brought up on The View and it turned into a heated debate between Whoopi Goldberg and just about everyone else.

Here’s the clip of Whoopi shouting down the rest of the ladies as she defends her position:

This is what Goldberg had to say on the topic:

Let me just point out that the comment that he made is based on what the young lady said she did. She said, “I hit him,” and I believe that was what Stephen was pointing out.

If you hit somebody you cannot be sure you are not going to get hit back. You have to teach women – do not put your hands on anybody. Do not live with this idea that men have this chivalry thing still with them. Don’t assume that that’s still in play. Don’t be surprised if you hit a man and he hits you back.

If you make the choice as a woman who’s 4-foot 3-inches and you decide to hit a guy who’s 6-foot tall and you’re the last thing he wants to deal with that day and he hits you back you cannot be surprised. Let’s not kid anyone.

Sunny Hostin was a guest host and she said, “I’ve tried a lot of domestic violence cases. Men cannot hit women. Period. Ever.”

Jenny McCarthy argued, “There’s no circumstance to hit a girl unless your life is in danger.”