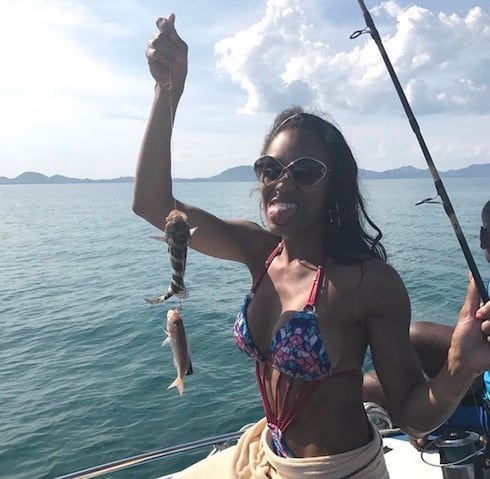 The Real Housewives of Potomac is aiming to amp up the fun and the drama for Season 2, and new cast member Monique Samuels promises to bring more than her share of each. Bravo’s official bio for the newest #RHOP addition makes it clear that the New Jersey-born Monique is used to “telling it like it is”: growing up, she says, “We all just spoke our minds.” And Monique’s tomboy inclinations–her father “taught her about tools and cars,” and one of her first dates with her now-husband came when they went fishing together–are almost certain to rub at least one of her fellow cast members the wrong way.

RELATED: How much of The Real Housewives of Potomac is fake? Multiple sources allege false premise

But Monique is also, by her own admission, a “boss.” She runs her own parenting blog, Not For Lazy Moms, which is sure to get a major boost once Season 2 airs. She’s about to graduate from the University of Alabama with a business degree. And she runs the the two businesses and one foundation (CRS Real Estate, Chris Samuels Enterprises, and the Chris Samuels Foundation) of her husband *and* business partner, former NFL Pro Bowl lineman Chris Samuels. One measure of how well Monique runs things: She and Chris own four houses.

Another, even more enviable measure? The Samuels family–Monique, Chris, and their beautiful kids Christopher (son) and Milani (daughter)–do a lot of traveling:

RELATED: Why is The Real Housewives of Potomac cast all black? The show’s origins, explained

Monique and Chris have a beautiful origin story to match. According to a Washington Post feature, they met in 2003, when the then 19-year-old Monique Cox was an aspiring hip hop star about to perform at a DC-area club. Monique had a boyfriend at the time, but Chris was immediately attracted to her, and the two kept in touch.

Several years later, after Monique and her boyfriend split, she and Chris “became friends, going to clubs and parties together” and even going on the aforementioned fishing excursion (where, she maintains, she caught more fish than he did). The two became very close friends, until Monique realized he was “falling in love” with Chris–and then, just a few weeks later, he told her he thought he was falling in love with her.

They were together until Monique wondered if the relationship was just “[aimless] dating”–and then a neck injury forced Chris into retirement in March of 2010. After much tossing and turning, Chris waited until New Year’s Eve–for he and Monique to be cozied up to each other, clad in pajamas, and sitting in front of a backyard fire–before popping the question. Monique’s response? “Of course.”

The following March, they tied the knot before 350 guests–and just celebrated their fifth anniversary:

Things are going so well that they may even be contemplating baby #3.

You can keep up with Monique’s jet-setting ways on Instagram here. And you can catch her in action when The Real Housewives of Potomac Season 2 premieres Sunday, April 2nd at 9 PM on Bravo.