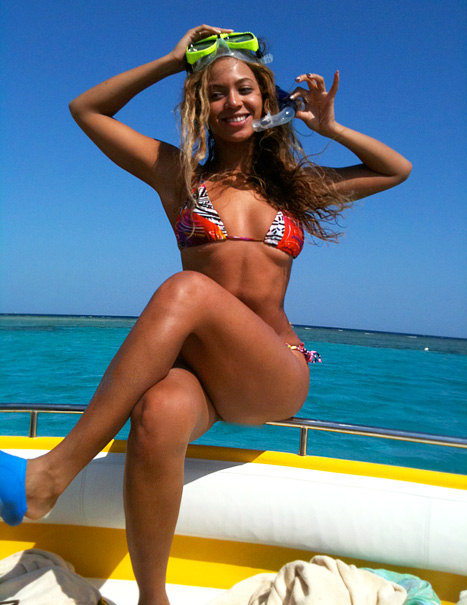 Beyonce’s body is banging after giving birth to Blue Ivy in January. How’d she lose the baby weight?

While the pop sensation once lost a lot of weight quickly on the Master Cleanse (nothing but water flavored with lemon, maple syrup, and cayenne pepper) after playing Etta James in Cadillac Records, Bey went the healthy route this time. She told People magazine, when she was named this year’s Most Beautiful Woman, that she was exercising at least three times a week for 90 minutes doing running, crunches, and of course, practicing dance. She also limited her diet to mostly protein and veggies. She drinks a lot of protein shakes, and has egg whites and lean meats. She wanted pizza really bad during her shoot for People, but held off.

Unlike Lauren Manzo, Beyonce gets to cook her egg whites, and eat more actual food.

Beyonce posted the above cute bikini pic on her website, and looked amazing this weekend during her three-date performances at the Revel in Atlantic City, NJ. Looks like all her hard work really paid off! (Of course having a billion dollars and a million people helping you doesn’t hurt!)