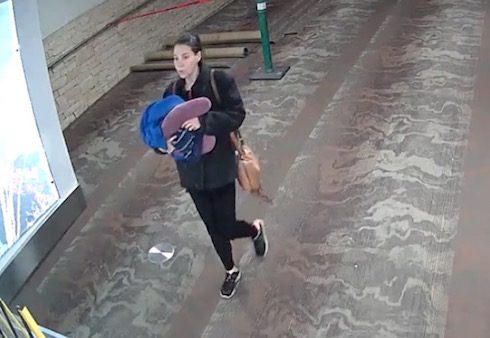 A newborn abandoned in airport bathroom immediately after being born there has come to the attention of authorities nationwide after local attempts at identifying the mother failed.

The Arizona Daily Star reports that at approximately 10 PM on January 14th, an employee at a car rental facility at the Tucson Airport called the Airport Authority Police to report an abandoned baby on a changing table in a nearby bathroom.

(Per the Washington Post, the baby had a torn umbilical cord, which responding medics clamped, but was otherwise healthy. He’s now in the custody of the Arizona Department of Child Services.)

After examining surveillance footage and interrogating other witnesses, the AAPD believes they’ve been able to reconstruct the sequence of events. According to their investigation, the baby was actually born about an hour earlier in a separate bathroom on the airport’s Concourse B. The unidentified mother then went to a second bathroom, near the baggage claim, “to clean up,” before abandoning her newborn in the third bathroom near the car rental locations.

Despite their best efforts, though, local authorities have been unable to identify the mother — who they believe is the woman in the image above. This week, police released the surveillance footage, along with the handwritten note found alongside the baby in an attempt at broadening their search.

Here’s an image of the note found with the abandoned baby; followed by a transcript: 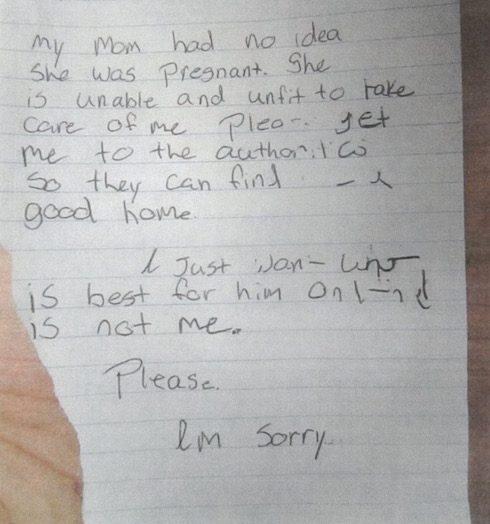 My mom had no idea she was pregnant. She is unable and unfit to take care of me. Please get me to the authorities so they can find me a good home.

I just want what is best for him and it is not me.

And here’s the newborn abandoned in an airport bathroom surveillance footage, released via the Tucson Airport Authority Police and provided on YouTube via Storyful News. The unidentified woman appears at the :30, 1:30, and 2:35 marks:

The Post also reported that Juana Quintana, a custodian at the airport, encountered the unidentified woman in what appears to be one of the first two bathrooms. She “asked if the woman was okay after seeing pools of blood on the floor”; the woman “left in a hurried manner” after telling Quintana that her baby was three months old.

Quintana added that the baby “was naked with its eyes closed.”

AZFamily.com noted that Arizona is a “save haven” state, which means that “parents can drop off newborns at designated locations like staffed fire stations, hospitals, licensed adoption agencies, private welfare agencies and churches.” Parents who do so can remain anonymous under the law, though they are required “to answer some questions about the newborn and its health and background.”

And, per the Post, babies “must be under 72 hours old and unharmed to be legally abandoned.”

Because the unidentified woman did not leave her child at a designated “safe haven” spot, it’s possible she’ll face criminal charges, when and if authorities do identify her.

Arizona police ask that anyone with information on the woman’s identify call 911 or 88-CRIME.