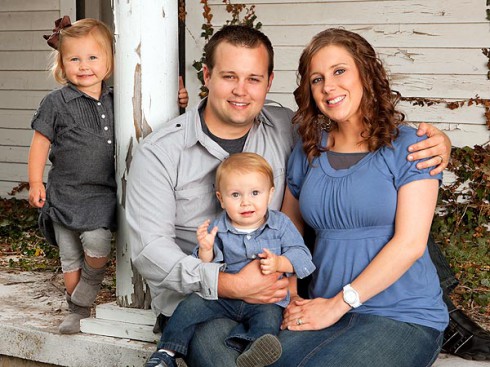 The Duggar family’s Babypalooza continues! 19 Kids and Counting mom and pop Jim and Michelle Duggar‘s oldest child Josh and his wife Anna are expecting their third child together. Josh and Anna are already parents to Mackynzie, 3, and Michael, 21-months.

“It is very exciting,” Josh tells People. “It’s fun for Michael and Mackynzie being so close in age and this baby will be, too. We feel very blessed and happy.”

Anna had taken a pregnancy test during filming in Asia for a special season of the show, but it was negative. “I thought for sure I was pregnant and so I was a little disappointed,” Anna says. “But two weeks later, I found out I was pregnant.”

“I got sick overseas and then when I returned home, I was then into the morning sickness,” she says. “But now, I have more energy than I ever had before.”

Josh and Anna have found out the sex of their baby but aren’t telling anyone yet. In fact, they won’t even confirm or deny whether or not the baby’s name will start with an “M” as their other children’s do. “We’ve been throwing around name ideas and we are pretty certain we have it down to two,” Josh says. “We will have to see.”

Jim and Michelle are also thrilled about the upcoming new addition. “Being a grandpa is really special because Josh and Anna live only eight miles away and our kids and their kids almost consider themselves brothers and sisters,” Jim says. “They love playing together.”

Just over a year ago, Jim and Michelle tragically loss their baby Jubilee who would have been the 20th child for the couple.

19 Kids and Counting: Duggars Do Asia premieres tomorrow night at 9/8c on TLC.

Singer Sophie B. Hawkins defends getting pregnant at 50