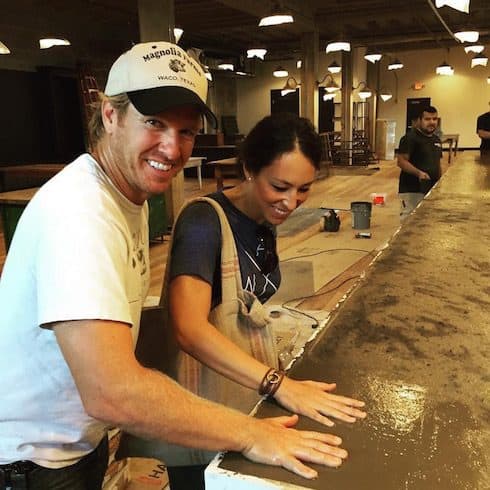 With Fixer Upper heading into the final episodes of its final season, Chip and Joanna Gaines’ HGTV contract is getting increased attention from TV producers and gossip hounds alike. According to several recent reports, the first family of home renovation is stepping away from their show only temporarily, in order to negotiate a more favorable deal for themselves.

Rumors about the real reason the Gainses are stepping away from Fixer Upper have been swirling for weeks. Those rumors’ connection with Chip and Joanna Gaines’ HGTV contract is simple: allegedly, the pair have been laboring under an outdated deal, one that grants the network a cut of the show’s profits disproportionate to the Gaines’ celebrity status, for the last few seasons.

At least, that’s what the anonymous insider who dished to Page Six last autumn had to say about it. And this person didn’t hold back *any* gossip — below is a long quote, but one well worth reading. From Page Six:

Many years ago, when Scripps, which also owns Food Network, signed Rachael Ray, they didn’t think about Rachael starting a magazine, launching product lines, getting endorsement deals and her books selling millions of copies. And so while Food Network turned Rachael Ray into a star, she made tens of millions and Scripps got none of it. After Rachael, they made sure no talent deal would ever put them in that situation again. Since the Gaineses were relatively unknown when they started, they signed the general Scripps talent contract….The talent can’t do anything without their approval -— any appearance, any publicity, any endorsement, any product —- you have to ask them for permission. It is awful. And on top of that, Scripps takes a big percentage of everything you make -— books, appearances, endorsements, products. If you make money, they take most of the money….So [Chip and Joanna] are using this end of their contract as a total renegotiation to get the deal they really want: more money, less work, more control. The timing of Discovery buying Scripps worked well in their favor. With Discovery hopefully now about to own Scripps, they are rolling the dice thinking the new owners will come running after them and give them the deal they really want.

However, a month later, a piece in Vanity Fair appeared to throw a wrench in these particular works. Their take claimed that the pair have pitched a completely new show to at least one network — but VF also claims that Chip and Joanna Gaines’ HGTV contract prevents them from pitching any home improvement-related show to a competing network.

So Chip and Joanna, if they are indeed trying to make an end run around their pesky general talent contract, would essentially be aiming for a “lateral move” by remaining on television, albeit in a completely new format:

According to an industry source who does business with HGTV parent company Scripps Networks, Chip and Joanna have met recently with at least one outlet to pitch a new show. Further, the source says, the two had been clashing with HGTV before they chose to end their series. The problems centered on the Gaines’ insistence on featuring products from their Magnolia Market line of home décor on Fixer Upper.

“They kept insisting on showing things with the Magnolia label, even though Scripps does not have a partnership with them on that stuff,” the source says. “This isn’t how business is done with Scripps. You have to come to some arrangement if you want to show your products on your HGTV show.”

…A limiting issue, the source said, is their still-existing contract with Scripps, which likely forbids them from doing another home-improvement show for another network. The source did not know if the Gaineses were pitching ideas for a series or a one-off special. “They’ve got to be pitching something in another format -— maybe a talk show or something like that,” says the source.

On a related note, Discovery’s $14.6 billion purchase of Scripps just overcame a major hurdle by getting European Commission approval. (Federal regulators have yet to weigh in on the merger, possibly because they’re busy trying to block AT&T’s acquisition of Time Warner on antitrust grounds.)

But Chip, speaking on Today in the wake of he and Joanna’s retirement announcement, sounded so enthusiastic about a return to the medium the two of them technically hadn’t left yet that you kind of wonder whether they really wanted to leave at all.

“Who knows?” he said, when asked if Fixer Upper would ever return. “We’re so excited about this break. But would we go back and do this again? Absolutely. In a heartbeat. It was a joy it was a pleasure. All the things you know about —- it introduced us to Kansas! A lot of folks in New York don’t know about us yet…but in Kansas, we’re crazy famous. We’re huge!”

In the meantime, Fixer Upper fans can rest assured of the following: rumors that Chip and Joanna are leaving Waco are just that; Magnolia Table, the Gainses’ foray into the restaurant business, is set to open next month; and Joanna is still pregnant and still due around July.

So, on that note, we’ll close with the latest public pics of Joanna Gaines’ baby bump, which Joanna herself shared following the unofficial opening of Magnolia Table earlier this week:

There's just some people you meet and you feel like you've known them forever. @ladydubbs what you stand for, what you create, and who you make space for – it's such an inspiration to me and so many others. Thank you for celebrating beauty, creativity, and women in such a raw and organic way. So fun getting our magazine teams together to host this #magnoliaxdarling weekend here in Waco. And even though Magnolia Table doesn't open for a little over a month, this was the perfect gathering to christen it! @magnolia @darling #magnoliajournal