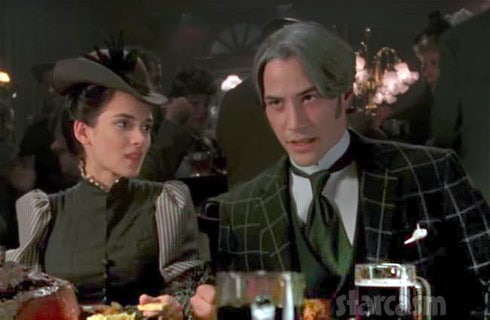 On the press tour for Winona Ryder and Keanu Reeves’ upcoming romantic comedy Destination Wedding Winona causally brought up the fact that she thinks the two of them have actually been married for decades after participating in a real wedding for 1992’s Bram Stoker’s Dracula. Are they really legally married?

“We actually got married in Dracula. No, I swear to god I think we’re married in real life,” Winona said during an interview with EW. She said that Director Francis Ford Coppola used a “real Romanian priest” and that they filmed the entire ceremony from beginning to end without cut-takes.

“We shot the master and he did the whole thing. So I think we’re married,” she explained. While Winona had a vivid memory of the day, which she said was Valentine’s Day that year, Keanu couldn’t quite recall. She was so insistent that it made him wonder if they were really married as well.

Although Winona might have a point about a “spiritual wedding” if it was done with a priest and proper ceremony, to get legally married in Romania requires quite a bit of annoying bureaucracy and red tape, so unless they were able to obtain a marriage license they’re not really married.

It’s still a good story, a nice fantasy – maybe they can reunite for another romcom about two actors who fall in love after learning they got married a quarter century ago filming a Dracula movie.

There’s no record of Winona and Keanu ever dating, but neither have been married – so this may be as close to marriage as they’ve gotten so far. (Winona was famously engaged to Johnny Depp for three years, and the filming of Dracula seems to fit in around the time they broke up.) Keanona have appeared in several films since Dracula including 2009’s A Scanner Darkly and 2009’s The Secret Lives of Pippa Lee.

MARRIED AT FIRST SIGHT Are the Season 7 Dallas couples still together?

Apparently Justin Bieber and Hailey Baldwin got married in secret