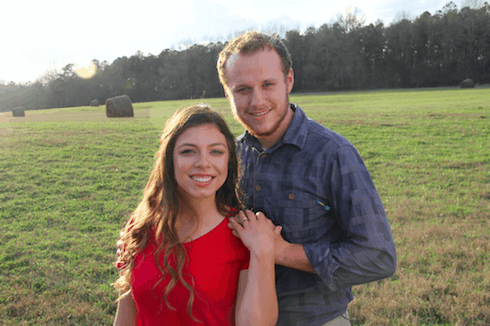 TLC has gotten very good at pairing Duggar family milestones with Counting On episodes. A week after the Counting On season premiere got a wink and a boost from official word that Joy-Anna had given birth to her first child comes the late-breaking news that Josiah Duggar and Lauren Swanson are now engaged.

And TLC was once again the one to break the story, getting the news out several hours before the Duggars’ web site and social media pages shared it. According to TLC’s article, Josiah “popped the question while vising with Lauren and her family at their home in Georgia,” and managed to ingratiate himself with the Swanson clan by “propos[ing] at the same spot where [Lauren’s] own parents became engaged.”

I feel like the most blessed guy on earth ?… Lauren said YES! God definitely opened our eyes in his perfect timing to show us how we complete each other. The more time I spend with Lauren the more I realize how I can't live without her. There's no one else I'd rather spend my days and grow old with! #engaged #weddingplanningbegins

If you’re thinking that this engagement happened pretty quickly, you’re not wrong. Josiah Duggar and Lauren Swanson began formally courting approximately 41 days ago, if the family press release is to be believed. This is the first engagement for 18-year-old Lauren, and the second courtship for 21-year-old Josiah, who split from Marjorie Jackson in 2016 after four months.

Honestly, Jim Bob and Michelle have to be cackling with glee right now. They’ve got enough children old enough to either begin a courtship, announce an engagement, announce a wedding, or reveal a pregnancy every single Monday for the duration of Counting On‘s new season if they time it right. Kris Jenner has got to be furious that she stopped at just six kids. The Kardashians’ three simultaneous pregnancies is now the triple lutz of reality TV: the Duggars are trying to be Nathan Chen doing six quads in one program.