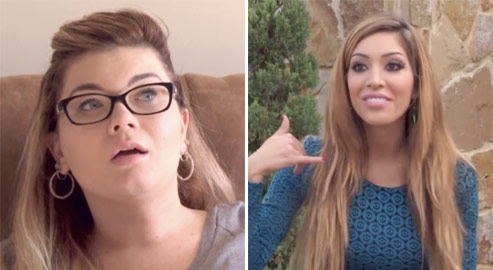 Last night’s two-hour season finale of Teen Mom OG had lots of fireworks. How did some of the main players react to all of the drama? Let’s find out!

Issues over custody of daughter Leah loomed large. Gary got defensive as he explained his decisions, including marrying Kristina Anderson off camera.

Just to let everyone know I got married to a woman I love. And did it without cameras because it was more special for me that way.

I’m responsible 4 Leah whether she’s with me or not. so I will do my part gotta protect my own. Thanks for all the support

Plz know anytime amber wants to come see Leah she can. I’m not the one who moved and hour away. She’s doesn’t come half time on her time.

Gary then retweeted a comment from a fan condemning Amber for speaking poorly of him on the show. “She [Amber] shouldn’t be bashing the father of her child on TV either if it works that way,” it read.

For more in-depth thoughts from Gary on this season, check out our summary of his recent Facebook Q&A.

As for Amber, she did her fair share of retweeting, too. Most were from fans showing support but the last RT–seen below–tossed shade in Gary and Kristina’s direction.

@AmberLPortwood they got your baby(ugh) Gary and his wife, while kristina kid lives wit her ex, who she cheated on with Gary. They’re a mess

UPDATE – Amber has since responded to some of Gary’s tweets, and, as you might imagine, they are not full of love and chill:

@ItsGaryTime wtf? I come every single time and if there’s something happening I always come next day..what an ignorant liar!

@ItsGaryTime don’t be on here saying a bunch of lies because you make yourself look like an asshole..

Catelynn and Tyler Baltierra: Catelynn expressed gratitude to fans who were inspired by her willingness to openly discuss her issues with anxiety and depression:

Just want to show people that anxiety/depression is a real and serious thing https://t.co/YlC66pXWSH

When someone asked Tyler how he has managed to make it through his own struggles with depression, he explained: “Years of talk therapy, connecting with my emotions & escaping through my writing.”

Farrah Abraham: Farrah didn’t have much to say other than being all about the explosive moment she called a producer a dumb, twisted motherf***er when they wouldn’t allow her to sign a contract to work on a competing show.

Check out the show’s official site for sneak peeks from the upcoming reunion show, as well as bonus footage from the finale.