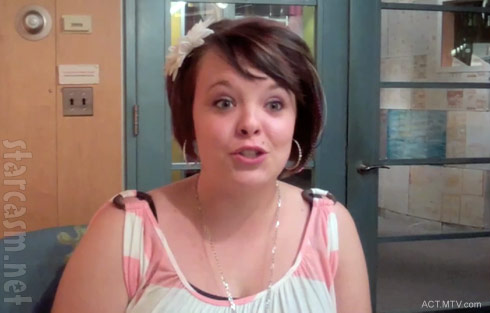 The Teen Mom Season 3 premiere is less than six hours away, but we’re still getting teasers! The latest is a video interview with Catelynn Lowell for MTV Act in which she talks about birth control, Carly, Tyler and what we can expect from her in Season 3!

That was sort of vague (as I’m sure she has to be) but seemed to line up exactly with our predictions for Catelynn this season. Here is a transcript of the interview minus the opening part about birth control – not because it isn’t important but because it is the usual sage advice: USE birth control! And if you’re uncertain about what kind to use talk to your doctor!

Yeah, he’s doing really good actually. He’s on summer break. You know, he’s taking the summer off from college and just enjoying it because he’s been working hard for a couple months there.

You’re definitely going to see me breaking away from – let’s see – breaking away from family and just kind of focusing on what I need to do and where I need to go in life and a lot of trials and tribulations and just family drama, and a little bump in the road for me and Tyler. Other than that, some good stuff too so