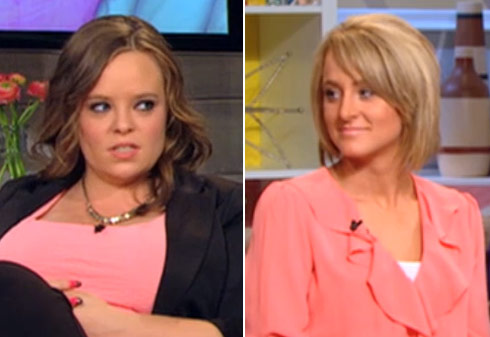 If the previews so far are any indication, the upcoming Ask The Moms special on MTV should be great!

In a new sneak peek via wetpaint of the special to air October 6 at 9 pm EST, the cast members of Teen Mom and Teen Mom 2 (minus Farrah Abraham) are given the opportunity to ask each other questions. Leah Calvert doesn’t go easy, as she asks Catelynn Lowell a very serious question:

Leah: Do you think that Carly may have some resentment that you’re having another child and you’re going to have a relationship with her?

Catelynn: I don’t think so just because I think it’s such an open adoption she’s going to understand where I was at the time when I was pregnant with her… That I was 16, living with my alcoholic mom and Tyler’s crackhead dad. Also, I’m 22 – almost 23 – and I’ve come a lonnnnng way from when I had her so it’s totally different. I mean I could understand, I feel like every adopted child probably wonders why… I just feel like if you explain it right then she’ll really understand. But, we’ll see.

As the franchise has so often highlighted, there usually isn’t easy answers for the stars of the shows.

BTW, I admit I laughed right out loud along with all the gals when Chelsea asked the TMs if they hated the TM2 cast 🙂 .

Jenelle Eason explains unplanned cross country road trip, why she may not be able to fly ever again