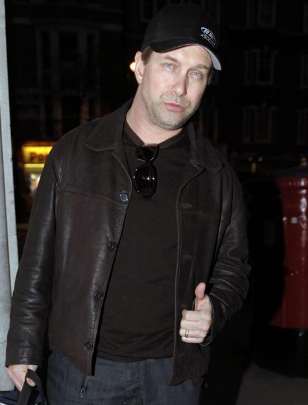 Most people,  when they can afford to, like to give a little some of the wealth they’ve gained back to the world, back to the universe, as a :thank you” of sorts. Sometimes it’s texting the Red Cross to send aid to Haiti, making a donation to a cancer research fund, or donating your time at a soup kitchen. It feels good to give away some of your time or money to help someone else who’s less fortunate, and/or in more pain and duress than you are.

The main problem with a charitable spirit, however, is that there are so many organizations that want your money it’s hard to wade through them all and pick the right one for you. Thankfully Lyn Fletcher is simplifying your dilemma by asking that you donate your extra cash to the Christian actor Stephen Baldwin.

“Whew! Thank you Mr. Fletcher,” you say as you log on to restorestephenbaldwin.org. If you really were a good Christian, you would have blown some cash on one of Mr. Baldwin’s movies, like Sharks in Venice, but this way you don’t actually have to watch his acting to give him money, and Stephen Baldwin doesn’t actually have to work to get money. It’s a win-win.

Mr. Fletcher was moved by Stephen Baldwin’s appearance on “Celebrity Apprentice,”  “I’m a Celebrity, Get Me Out of Here” and “UK Celebrity Big Brother” and was astounded to find out that Mr. Baldwin (the Job of our time) was having financial difficulties. Stephen became a Christian a few years ago, and according to Mr. Fletcher, he’s been denied  good roles he used to get because he’s been forced to choose roles that comply with his new ethical standards, films like Sharks in Venice.

Mr. Baldwin’s assets are about $1 million, but before you scoff, that’s about how much he owes in taxes, so really he has zero money. Now, some of us may wonder why Mr. Baldwin didn’t practice responsible money management with the money he received for some of his pre-Christian movies like The Usual Supsects or Biodome, but we’re just being unreasonable like his family *cough* Alec,*cough* who according to Mr. Fletchers site ” does not perceive Stephen’s predicament as a matter of spiritual warfare. They see Stephen’s outspoken Christianity as poor choices therefore they will not help.”

Here’s an interview with Lyn Fletcher, the site’s founder, with a Dublin radio station:

Stephen didn’t personally okay this charity site, but his people approved it and all the donated money reportedly goes directly into his bank account. Want to know why you should fork over your hard-earned cash to a former Hollywood actor?

Here’s some excerpts from the Q & A section, which will clear things up (not really):

Q- Why does Stephen need personal wealth?
A- Stephen’s influence is in Hollywood. Hollywood worships money and without it you are seen as a loser and cannot be an effective influence to this group.

Q- How much money does he need?
A- From what I read in public court documents Stephen needs several million dollars to pay all of his creditors but he deserves hundreds of millions for his Job like faithfulness in the face of relentless loss and persecution.

Q- What percentage of a gift actually reaches Stephen?
A- 100% goes directly into his bank account through online gifting.

Q- What about other people who are hurting in this economy?
A- Those that just came to your mind mail them a token gift also.

Maybe he should ask multi-bajilionaire Christian Miley Cyrus how to get his hands on a plum rated-G gig, oh wait, he already did.

Wave of Money: Frank Black tells it to us straight