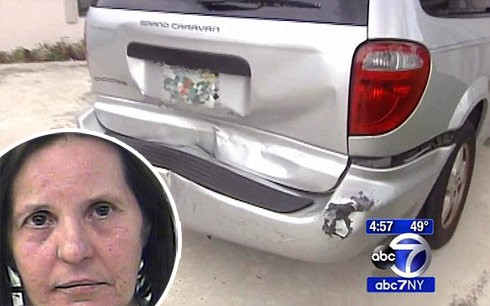 Cathy Bernstein tried to flee the scene last week after ramming another driver. The Florida woman might have gotten away with her crimes, too–if it weren’t for her meddling…car!?!

Police in Port St. Lucie, Florida responded to a hit-and-run call from Anna Preston, who claimed that someone in a black car had rear ended her and then taken off. (That’s Anna’s van above.)

At around the same time, WPBF reports that the police dispatch received an automated call from a vehicle’s emergency system. The vehicle informed the dispatch that it had been involved in an accident and to press zero to speak with the occupants of the car. The dispatch did just that–and Bernstein answered!

Putting two and two together, the police followed up by heading to Bernstein’s residence. They noticed her car had extensive front-end damage and that there was silver paint from Preston’s Grand Caravan on it. In addition, her airbag had been deployed.

Still unwilling to fess up, Bernstein claimed that she had hit a tree and not someone else’s ride. After the officers laid out the evidence against her, she eventually admitted to the hit-and-run. The cops also discovered that she had been involved in another accident before to the one with Preston.

Bernstein was then arrested and taken to jail.