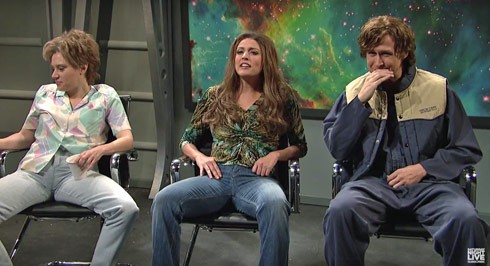 Kate McKinnon absolutely slayed as a chain smoking lady with a totally different alien abduction story than her friends’ during a skit on Saturday Night Live.

She was so dang funny that she got Ryan Gosling giggling, which set everybody off, as all the actors did their best to power through the narrative. Everybody–including Kate–was making that hilarious clinched face we all do when we’re busting up on the inside while trying not to let it show on the outside.

When asked about his abduction, and whether they all stayed on the same ship the entire time, Gosling’s character said, “Well my body did, but my consciousness shone what lies beyond time and space. It was so beautiful.”

You gotta watch to find out what happened to McKinnon’s character: