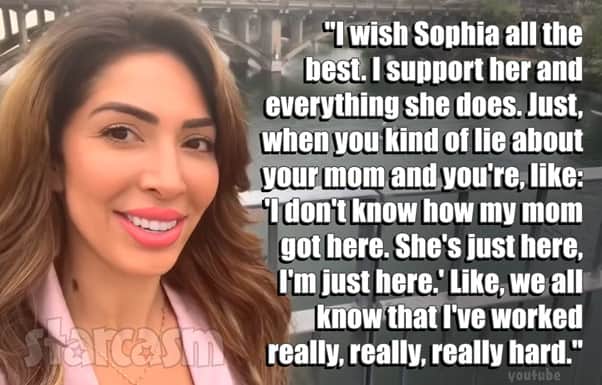 Former Teen Mom OG star Farrah Abraham took to Youtube on Tuesday to share a live vlog in which she revealed details about her “crazy day” while walking on a bridge in Austin, Texas. In the video, Farrah says that she and her ten-year-old daughter Sophia are currently involved in some sort of television project, and in the course of production, Sophia hurt her by forgetting some of Farrah’s accomplishments.

“I had kind of a breakdown today, literally like lost it,” Farrah says, “because Sophia, like, totally forgot that I went to college, she totally forgot, like, what I have my degrees in. She acted like she purely just was random and, like, existed out of nowhere.”

“I wish Sophia all the best,” Farrah continues. “I support her and everything she does. Just, when you kind of lie about your mom and you’re, like: ‘I don’t know how my mom got here. She’s just here, I’m just here.’ Like, we all know that I’ve worked really, really, really hard.”

Farrah says that Sophia later apologized for forgetting, but that didn’t prevent Farrah from having her breakdown. “She was, like: ‘I’m sorry mom that I totally forgot you went to college, forgot that you know what you’re talking about, forgot that I was in stores and doing things and, like, you had me along, and I actually have learned that.'”

Farrah continued by trying to remain positive, to a certain degree:

Sophia now has this great opportunity. I love her so much. I’m supporting her in it, and when she was not understanding, and not paying tribute, or being grateful — I think I have a big thing about gratitude right now in my life. You probably should be grateful for every little experience, grateful for your heritage, grateful for your background, grateful for your grandma, grateful for your mom. And we all know I haven’t gotten along…with my family for some time, but now everything’s kind of resonated and it’s beautiful. It’s really great, and I just don’t want Sophia being entitled, thinking like she should just have stuff given…I think that’s where I’m coming from. I was really hurt. I was really hurt today, but through my breakdown — you know I have some epic breakdowns — but I guess it’s, like, self development and growth in my own right, right?

Towards the end of the video, Farrah got sidetracked a bit by a man walking his dog the other way on the bridge. “Watch, this guy’s gonna check me out,” Farrah says as she turns the camera on the man, who somehow manages to avoid turning his head to check out Farrah.

That incident reminded Farrah of a bonding moment she had with her daughter. “OK, Sophia also did this funny thing at the airport. She was, like, counting all the guys who are checking out her mom,” Farrah recalls, smiling. “Everyone has a girlfriend, but what’s the point of a girlfriend when you want to check out everybody else?” Farrah asked on behalf of Sophia. “OK, well that’s for another time, another discussion.”

Farrah then wrapped up her vlog session. “I’m gonna go get in my car and go get some food, stop acting like I’m single with no responsibilities and get back to the real world. Bye!”