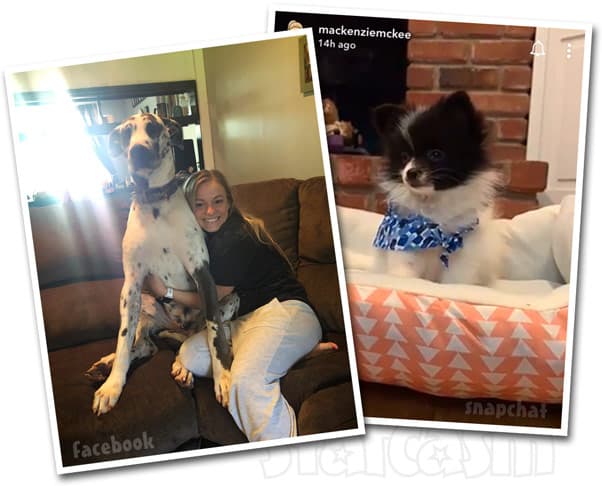 I will include a nearly complete transcript of what Mackenzie had to say about Hank and Annie below, but I will start with a little context and a brief recap.

Mackenzie made headlines last year after she was accused of leaving her Great Dane Hank inside of a chain link kennel in her back yard while she and her family went on a six-day vacation to the Bahamas. Mackenzie later responded and assured everyone that she had a neighbor looking after Hank and he was “fed, watered, and played with daily.”

Prior to the Hank pen controversy, Mackenzie garnered a lot of attention online after she posted a video of her son Gannon kissing and playing with a dead puppy in January of 2017. (The family’s dog Mia had given birth to two puppies, but refused to feed one of them, and it passed away.)

In her recent Snapchat videos, Mackenzie says that she moved in with her dad after her mother Angie Douthit passed away in December. She was unable to fully take care of Hank, and a friend volunteered to allow the large dog to stay on his 30-acre farm. After roughly a month and a half, Mackenzie went to get Hank bank, but realized when she saw him at the farm that it was a better home for him and let her friend keep him.

Mackenzie made numerous posts about getting a little Pomeranian puppy named Annie for Gannon’s birthday in September of last year. I found some videos and photos from her Snapchat that were re-posted on reddit. Here’s an embed — just be aware that the beginning of the video includes skipping through several clips very quickly:

Mackenzie McKee did in fact get another dog☹️ from r/TeenMomOGandTeenMom2

In her new videos, Mackenzie trashes the Petland chain of stores that she purchased the dog from and reveals that her family found Annie dead beside the couch about a month after they got her.

There was an autopsy done, but there is no conclusive cause of death. Mackenzie offers up her theory in the videos: “So what I think happened is they sold us a dog with a cracked skull and she maybe bumped into the couch and passed away.”

I do want to point out that Mackenzie’s timeline is a bit off, which might make her theory a little less likely. “We brought Annie home. We had her for — one month? Yeah, one month,” Mackenzie recalls in the clips. “And this was two weeks after we got rid of Hank, and right after my mom passed away. We found [Annie] passed away by the couch.” Mackenzie bought Annie in early September, and Angie passed away in December, which would mean that they had Annie for more than three months. It was a very awful time for Mackenzie, so it is understandable that she might have gotten the timeline a little mixed up.

Here is a nearly complete recap of what Mackenzie had to say about Hank and Annie, including her remarks about how her videos were surely going to be turned into articles like this one. (Mackenzie references clickbait articles by guessing they will use a title like “Mackenzie gives her kid away.” That’s an odd issue for Mackenzie to have in that her clickbait partners are some of the most egregious about sensationalized and misleading post titles, including articles about herself.)

[A transcript of Mackenzie’s Snapchat videos.]

So Hank was a 200-pound dog. He was a very large dog. He had a submissive peeing problem. So, any time he would come inside, he’d pee on furniture. You stare at him, he pees on furniture. Any time you don’t give him attention, he eats things. Like, he ate a loveseat once. He’s eaten the siding off of our house. So, Great Danes, if you are looking into getting a Great Dane, they need your full attention all the time.

But, I was not going to get rid of him. I was going to stick it out. But, it was rough. It was hard. He was inside most of the time, but he would bark to go outside, and when you let him out, he’d just run around the yard…

#TeenMom3 @DouthitKenzie defends leaving her Great Dane in a pen in her back yard while she & husband Josh are on vacation in the Bahamas after a neighbor called animal control: "We've had someone feeding & watching him daily." (Includes photos of the pen) https://t.co/BemUEN0mld

He was a pretty spoiled dog, to say the least. But he needed my full attention. So when my mom passed away, I moved in with my dad for over a month to take care of him. And my mind could not really focus on anything else. Like, I was just — I just lost my mom, I’m taking care of my dad, I’m cleaning his house, going back and forth, trying to make everything work.

So, a friend has a 30-acre farm and loves Hank. And he was, like, “Let me take Hank until you get your life figured out, until you move back home.” And I didn’t know if I was going to sell my house and live with my dad, or what was going to happen. My dad needed me. He needed all of his daughters.

So, I was, like, “Perfect!” Because I — it was rough, the way my life was at that time. So I cried and I hugged him and he came and got him, and I’m, like, “I’ll see you later buddy.” Like, I knew I was going to get my life back on track, and I knew I was gonna go get Hank back…

It was a month and a half later and I went to the farm to get Hank, and I was super excited. I had his big kennel in the car and I just ran up to him, I hugged him — I missed him so much! And it was like — it was like I could hear him saying, “I miss you mom, but I’m really happy here. Like, I don’t want to live in town.” And the guy says he hates being inside. People were so rude to me that I would let Hank outside. Like, “You don’t let your children outside do you?” Actually, yeah I do. My kids love to play outside.

I already know this is gonna be in magazine articles and someone somewhere is going to say I “gave up my child” because of this, and this is why I don’t — I haven’t addressed it, because of how people treat me.

Anyways, I could just tell, like, it was just in my heart, I’m, like, Hank is happy here. And he, like, came up and hugged me, and was out chasing squirrels, and was running around the farm! There were five other dogs there and he was, like, playing with them and this stuff, and it just — I just broke down. And I told the guy, I was, like, “He’s happy here isn’t he?” And the guy was, like, “Yes! If you want me to keep him I can.”

And I was, like, “I don’t want you to keep him, I want my dog back. But, I think that he’s happy here. I think he would be mad if I took him home, back to where we were.” We live in town. Our back yard’s not very big, and I was just — obviously he wasn’t getting the attention he needed, even though I was on top of him every day, and letting him in, and he just — he was happier there.

I do get to go see him, and next time I go see him I’m gonna Snapchat it because it is sooo cute! I get updates on him all the time. Any time I miss him, the guy is so great…It was like God knew that needed to happen for me to focus. But it was sad.

And then we had our little dog Annie. Which everyone told me not to purchase from PetLand, and I did. And — don’t do that! Please learn from me, and if you — this is gonna end up in an article too — adopt, don’t shop. Adopt, don’t shop. That’s what we did with Hank. He was a full blood Great Dane, but he needed a home. We gave him a home.

Annie, we went — I was, like, jokingly going into the pet store, and Gannon fell in love with him. It was Gannon’s birthday. I got Gannon Annie, the little Pomeranian for his birthday.

And they overcharge! And the way that they treat their puppies is sooo wrong! They literally advertise their animals! They are animals! “Hey, if something happens to this dog, you can come back in and we’ll give you a free one.” Like they’re iPods, like they’re freakin’ iMac laptops! No, they’re dogs. They are dogs. I hate the way that they advertise.

I don’t know why I did this. Everyone told me not to do this. I’ll never do it again, and I am here to say that I was wrong.

And just like that, I have an 8 year old. Gannon you are such a special little dude. Happy birthday 🎉

But we brought Annie home. We had her for — one month? Yeah, one month. And this was two weeks after we got rid of Hank, and right after my mom passed away. We found [Annie] passed away by the couch.

We went and did an autopsy to try to see what was wrong, and it was just — we don’t know what was wrong. We probably bought her already sick. I’ve heard of people going in and dogs falling from the top cage to the bottom cage, and they do nothing about it. So what I think happened is they sold us a dog with a cracked skull and she maybe bumped into the couch and passed away.

With all the bad luck that has happened to me, I was, like, “Why? How and why?” And I was in bed for a week after this. I’m, like, “I feel like I’ve lost everything.” But then I look at my kids and I know I have to get myself up — and I also know — I need to address this because everyone’s asking — but I also know people are going to write articles and make it into something it’s not.