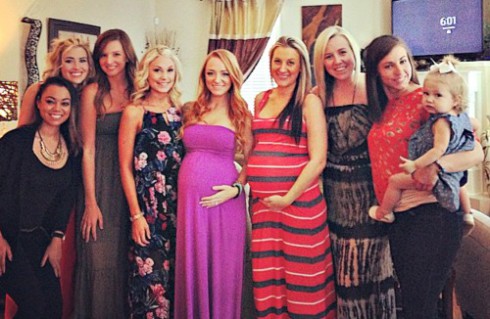 This weekend, Teen Mom OG‘s Maci Bookout celebrated the impending birth of daughter Jayde Carter with a baby shower. But, is there something else to celebrate? In the picture Maci shared, she definitely seems to be sporting a sizable ring on that finger! Here’s a better look… 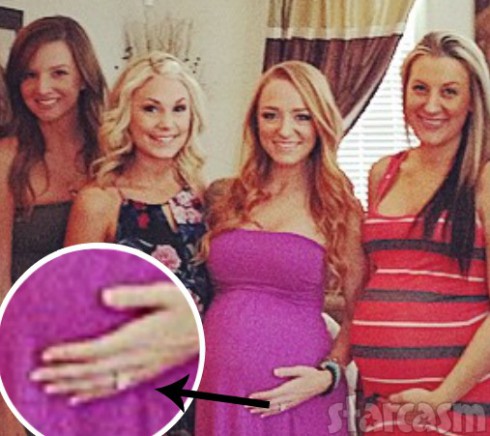 “Had a wonderful shower yesterday celebrating Baby Jayde,” Maci said on Instagram, where fans were quick to notice the bling. “Thanks to everyone that was a part of it. Jayde is already such a lucky little lady! #babymoney #JC”

If Maci is engaged, it seems boyfriend Taylor McKinney popped the question pretty recently, considering she wasn’t wearing a ring in a picture she shared two weeks ago.

When Maci announced her pregnancy last December, she said she was concerned people would judge her for having another child before getting married — but added that even if Taylor proposed, she didn’t want to have a wedding while pregnant.

“Before I got pregnant, we talked heavily about marriage — and we still do, but I don’t want to be a pregnant bride. That would be way too stressful,” she said. “Obviously, I wish we would have been married first, but everything will come together afterwards.”

Even if she and Taylor are engaged, Maci’s biggest focus right now is preparing baby Jayde’s arrival.

“This pregnancy is so different than my first one! This time around, I’m prepared to take on the added responsibility, and I’m confident in my parenting abilities,” she said on Instagram earlier this month. “I can’t stress enough how important it is to wait until you’re ready to have children. Follow @CandiesOrg to learn more!”

Find out more about Maci’s relationship with Taylor and her pregnancy by tuning into Teen Mom OG on MTV tonight at 10/9c.

Pregnant Mackenzie McKee reportedly attacked, dragged off a concrete porch on her stomach