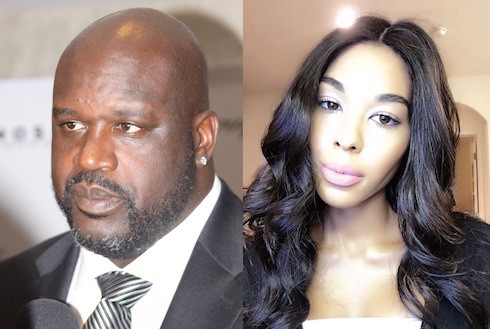 In light of two new videos highlighting the role that Moniece Slaughter’s sex tape will play for the rest of Love & Hip Hop Hollywood Season 3 comes an even more salacious report–and one that the reality star shot down almost immediately. Apparently, Jason Lee, to whom Princess went for Moniece’s sex tape in the first place, has it on good authority that Moniece Slaughter and Shaq got pregnant together years ago, when the NBA legend was still married to Shaunie O’Neal.

While Moniece hasn’t publicly disputed the existence of the sex tape (which will become a major plot point during the upcoming episode of LHHH–click here for a preview), it looks like she’s threatening legal action against at least Lee. Fameolous was first on the scene with the details: according to their report, Jason didn’t even go the backdoor route, choosing instead to reveal the story via his own social media account. You can see a screenshot of his since-deleted post here; the following is a censored but unedited transcript:

I rarely do this anymore (although I used to enjoy it). @moniece_slaughter I don’t do the social media thing anymore but since you’re out promoting the sex tape you want the world to know about here we go. I’m not worried about you and your petty a$$ behavior. Legal court or one of public opinion has never scared me. If you’re concerned about your anal wig being shown to the world don’t worry about it. If I was gonna drop it I would. As far as monetizing off your sex tape id rather sell the story of how you got pregnant f*cking @shaq while he was a married man. You are a worthless piece of genetic garbage and if you don’t want the world seeing your pu$$y online drop giving it so freely to maf*ckas. You’d think your vagina had a “donate .50 cents a day” sign next to it. Saddest part of this whole saga is that you’re truly a medically disturbed person that does anything for attention. Keep poking this sleeping dog if you want. I can do this all day! Ps, here’s a receipt of where you text me sayng you weren’t pursuing whatever ridiculous charges you think you can. That counter suit for public slander will be a maf*cka you broke b!tch. Ima take that EBT card too then what you gonna do for food. Huh!

Moniece clapped back on social media, sharing an Instagram update that might have seemed cryptic to fans not aware of the late-breaking gossip:

A few hours later, Moniece got right to the point, breaking down the alleged timeline for skeptical observers in order to prove her innocence and try to blow the whole story up:

? I think that's called #slander #nextupceaseanddesists I would say who I was was with in 05' & 06' but I covered his initials last season on camera. I would say who I was with in 07' but I already did In an interview remember? and I don't need to repeat it. 08' did an interview where he lied incessantly w/ the same person who's telling this particular lie. 09' was with my baby daddy. Now shut up bout a timeline stupid

Plus, generally speaking, lawyering up is a pretty good way to either kill a fake story or make people think twice about repeating it. But Jason Lee doesn’t sound like he’s concerned about any legal blowback–so this particular drama could get a lot nastier before the Season 3 reunion.

LHHATL Season 6 begins filming: Karlie Redd and Young Joc back together for the cameras