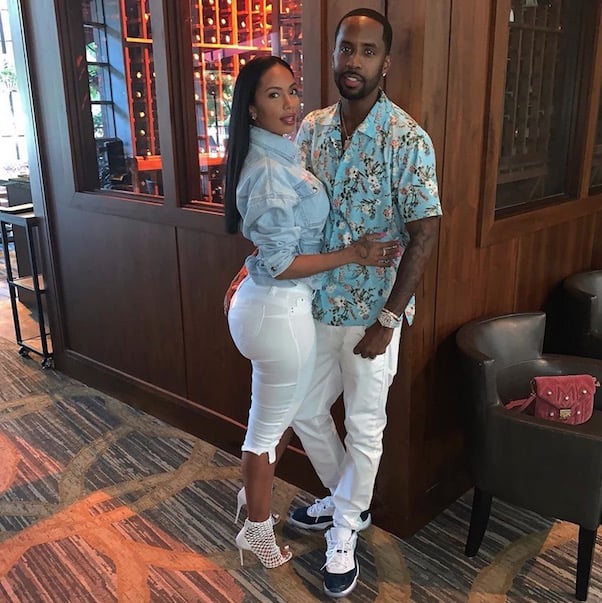 Love & Hip Hop stars Safaree and Erica Mena have reportedly been planning their 2019 wedding ever since his surprise Christmas Eve proposal. But the engagement may have been called off for good thanks to Safaree’s alleged cheating ways — and an earlier marriage proposal he supposedly made to his ex Gabrielle Davis after Safaree was already engaged to Erica.

The timeline is a little fuzzy, but we know for sure that Erica and Safaree were already dating when news of her return to Love & Hip Hop Atlanta for Season 8 leaked last December. Since then, there’s been plenty of gossip about Erica’s supposed pregnancy by Safaree, though it still appears as if all the talk remains just that. So, for all we knew, the couple was content to ham it up on their joint Instagram page and plan their wedding ceremony — which, until this week, didn’t have a date attached.

Then, late last week, model Gabrielle Davis — Safaree’s ex and a former guest star on Love & Hip Hop Miami — dropped a bomb on her Instagram page. Gabrielle shared a string of DMs she says is between her and Safaree, from just a few weeks ago, in which the person on Safaree’s end of the conversation says what he really wants is “To be happy and with you” — meaning Gabrielle.

The May 29th date on those DMs sent eyebrows skyward, and got a response from Safaree in a big hurry. He took to Twitter to apologize to Erica for “any embarrassment” from “being immature.” Most notable in Safaree’s apology is that he never once denies that it’s him on the other end of the DM with Gabrielle, says that Gabrielle is being petty or making things up, or in any other way denies having told her (Gabrielle) that he actually wants to be with her instead of Erica.

This is not a loss I would be able to handle.. I’ve lost a lot b4 and dealt with it.. but seriously I cannot lose you. I have never felt so complete in my life and that feeling will be gone if I lose you. You are my everything and I cant see my future without you. Please Erica

I am sorry for any embarrassment I have brought to you from me being immature. I apologize from the depths of my soul & heart. You are the most important person to me in the world. I know this is a joke to some ppl but this is real life and I made a mistake. I’m sorry.

And since then, it’s seemingly been back to smooth sailing for Safaree and Erica Mena. (That is, after she got through smashing the vases his apology roses came in.) Erica shared messages of support for him on social media; Safaree shared a video of the two of them kissing; and he’s since announced that he and Erica will be getting married this coming August, as in next month. Oh — and Safaree bought Erica a car. Though it would appear she doesn’t have a driver’s license:

The greater Love & Hip Hop fan community, however, seems kind of unconvinced. And with good reason! That was a really abrupt turnaround from Erica — who, we should point out, has yet to restore to her Instagram page any of the photos of herself and Safaree that she deleted after Gabrielle posted her DMs. Safaree then turning around and giving a general wedding date, if not an exact date, just makes the whole situation feel rushed and weird. It’s like Safaree and Erica Mena decided to just go ahead with their plans as if nothing happened and without taking a minute to consider whether or not it’s what they still want. Safaree’s apology seems heartfelt enough — but then everything this couple does is so public and obviously staged that it’s hard not to assume their brand-new wedding plans are, too.