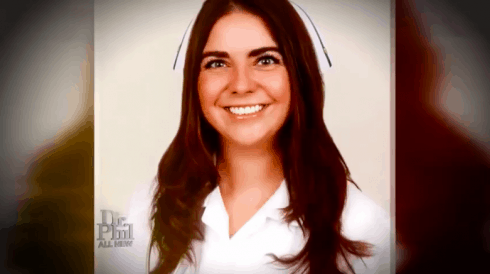 Today’s episode of Dr. Phil “Nurse Heather: Saving Lives and Slowly Killing Her Own?” deals with the story of couple John and Heather. Both are suffering from substance abuse issues but Heather’s problems have turned her into a real life version of Nurse Jackie.

Nurse Jackie was an HBO show starring Edie Falco about a nurse who became addicted to opiates and started stealing them from her work. Once a brilliant nurse who was valedictorian of nursing school, Heather started stealing pain meds from her work after the ones she was prescribed for back pain ran out. In an ironic twist, she’s currently working at a treatment center that helps patients combat drug abuse. 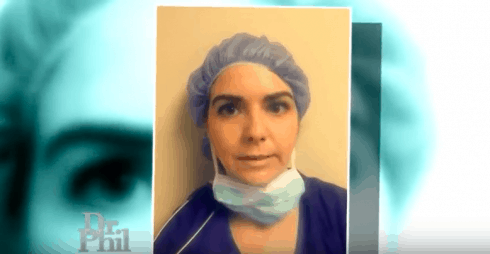 Heather’s own drug abuse has escalated so bad that she will take just about any opiate she can get her hands on and even shoots the most powerful meds like morphine and Dilaudid into her veins. 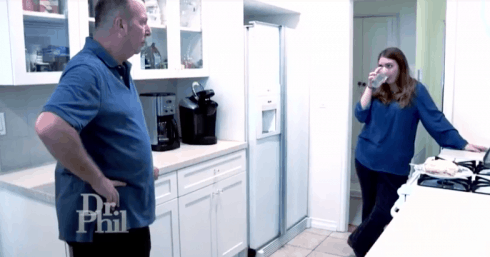 Heather’s husband John struggles with alcohol, and says he drinks because Heather is “both physically and verbally” abusive to him. Heather thinks she has things under control because of her medical training, but both her husband and 18-year-old son Cameron think otherwise and hope she accepts Dr. Phil’s offer for treatment.

John says Heather “goes completely crazy” when he finds her stashes of pain medication. He says a recent argument ended with Heather burning him with a cigarette. Heather admits that when she’s withdrawing from the meds she’s a “real b!tch” because she starts panicking.

Heather is currently under investigation in three states because of her problem. Her biggest fear is losing her nursing license forever because she has dreamed of being a nurse since she was a child.

John says he copes with the stress of his wife’s opiate addiction by binge drinking at night. Conversely, Heather says she thinks she abuses drugs to cope with her husband’s drinking.

John says Heather is the one with the problem because she has a daily problem while he only has a problem every “six to eight weeks.”

Dr. Phil pointed out to Heather that the fact that she injected drugs while on the job is a felony. Heather responded that she didn’t realize she was that bad, but hearing Dr. Phil confront her about the reality of the situation makes it sink in for her. “I’m tired of the cycle,” she says. “I just never thought this would be me.”

Dr. Phil further explained that taking care of patients while high could lead to mistakes that could kill someone.

Heather and John met at an AA meeting. John was her father’s roommate and AA sponsor at the time.

Both Heather’s father and son, Cameron, appeared on the show to share their concerns. Their top worry is that Heather will someday suffer from a deadly overdose. Heather still feels that since she has medical training, she can manage her severe drug use and keep herself safe.

Dr. Phil points out that there is no “safe space” when it comes to this kind of drug abuse. Heather is concerned with saving her marriage, but Dr. Phil says he’s more concerned with saving her life. He also recommends that since she’s in such trouble she needs to take action, come clean, and declare herself an “impaired professional” while providing proof that she’s undergoing treatment.