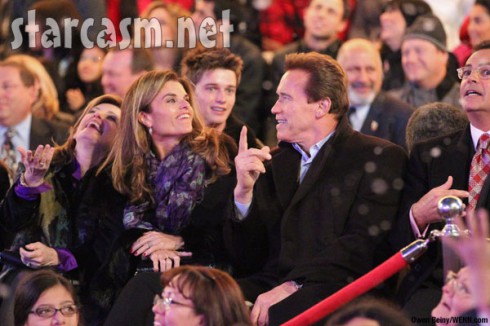 All signs are pointing to a reconciliation between Maria Shriver (56) and the former California governor and forever Terminator Arnold Schwarzenegger (64) (pictured above in 2010,) despite the fact that he fathered a love child with the maid 15 years ago.

Arnold and Maria spent the holidays together with their four children Katherine, 22, Christina, 20, Patrick, 17 and Christopher, 14., and sources close to them have been telling the media a reconciliation in happening. To top things off, within the past few days Arnold was photographed wearing his wedding ring (which features a prominent stone.)

The couple split May 2011 after news broke that Arnold fathered a baby, Joseph, 15 years ago with housekeeper Mildred “Patty” Baena. Joseph was born within weeks of Arnold’s fourth child with Shriver, Christopher, meaning both women were living under the same roof together pregnant at the same time with Schwarzenegger’s babies. Joseph, now outed as Schwarzenegger’s son, dressed as his dad’s role in Conan The Barbarian for Halloweeen.

Shriver filed for divorce in June, but attended Arnold’s 64th birthday party in July, and they’ve been spending lots of quality time together recently. According to TMZ, Arnold is being extremely sweet to her, and she’s rethinking the divorce because of her religious beliefs.

Would you take Arnold back after all of this?

Arnold and Maria: We won’t be back