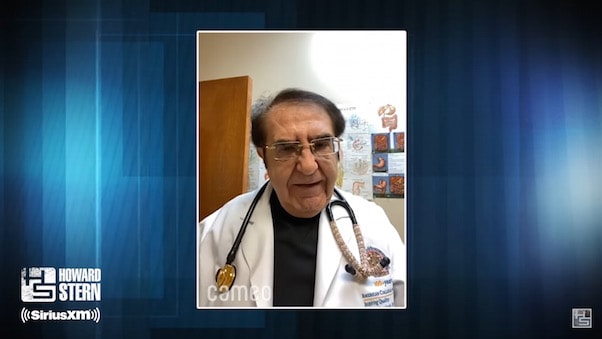 If you were surprised by the blink-and-you’ll-miss-it appearance of Dr. Now on Howard Stern late last week, you’re not alone. Thanks to a well-meaning fan of Howard’s, the My 600 Lb Life surgeon extraordinaire made an unexpected, literal Cameo drop-in on the show via video call.

It was likely the last on-screen appearance Dr. Nowzaradan will make for some time, given that My 600 Lb Life remains on an indefinite hiatus thanks to the still-worsening coronavirus pandemic. And, depending on what happens with the ten gross negligence and fraud lawsuits filed against the show’s current producers by former cast members, it’s possible that the show will both look and feel radically different when it returns — assuming, of course, that it does return.

Given context like that, it’s unsurprising that Dr. Now is hiring himself out on celebrity video site Cameo. The good doctor is charging $200 for his messaging services. Last week, it was longtime Stern fan and occasional caller Mariann from Brooklyn who plunked down the C-notes to get a message through to Howard, whose contract with Sirius XM is up next month.

First up, here’s the full message from Dr. Now on Howard Stern, along with Howard and Robin’s pleased-yet-befuddled reaction:

And here’s what Dr. Now had to say:

Hi, Howard. I hope you’re doing well and staying safe. I have a message booked by love, Mariann, from Brooklyn. She says, “Over 35 years, you have been a staple in our life. You kept us sane during this pandemic. 41 days to Sirius XM contract, and your fans are praying that you will stay, just a little bit longer. Please, please say that you will,” and that’s all she needs.

And Howard? If you stay another five years, I’ll send you a copy of my book. Howard, best of luck to you, and I think if you stay, your fans will be delighted. Bye, Howard. Take care of yourself.

I kind of get where Howard and Robin are coming from, though. There’s a pandemic on, and My 600 Lb Life isn’t filming, but that doesn’t mean no one’s going to Dr. Now for weight loss surgery. Then again, it’s probably safe to assume that someone as frank as Dr. Now wouldn’t take on the extra work of recording occasional Cameos if he didn’t have the time to do it. And by “extra work” I mean “five spare minutes after a bathroom break.” It’s got to be a pretty lucrative side hustle at the very least.