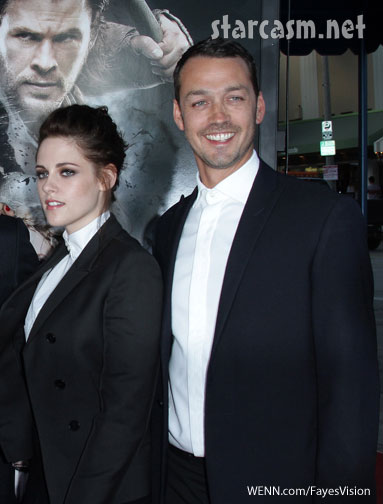 Both People magazine and US Weekly are running with stories that Twilight royalty Kristen Stewart cheated on her longtime boyfriend Robert Pattinson with her married Snow White and The Huntsmen director Rupert Sanders.

US Weekly says they have photos (click here to see) and details proving that “on July 17 in L.A., the 26-year-old actor’s girlfriend and Twilight costar, Kristen Stewart, 22, was caught by photographers in a series of steamy rendezvous with her Snow White and the Huntsman director, Rupert Sanders, 41.”

A source told People that it was just a one-off thing, and not an “affair.”

“She wasn’t having an affair with Rupert. It was just a fleeting moment that shouldn’t have happened,” says the source. “She never meant to hurt anyone. She’s a good person who just made a bad choice.”

Reps for both Stewart and Sanders had no comment. The 41-year-old director is married to Liberty Ross, a 31-year-old British Vogue model. They have a five-year-old and a seven-year-old.

UPDATE – Kristen Stewart issued an apologetic statement on Wednesday, all but confirming the story! CLICK HERE to read it in full.

Wow! This is a pretty earth-shattering thing in the Twilight world if it’s true, and it looks like it probably is. Are KStew and RPatz (a.k.a. Robsten) going to be no more?

PHOTO: Kristen Stewart wears see-through Erdem dress at the On The Road premiere