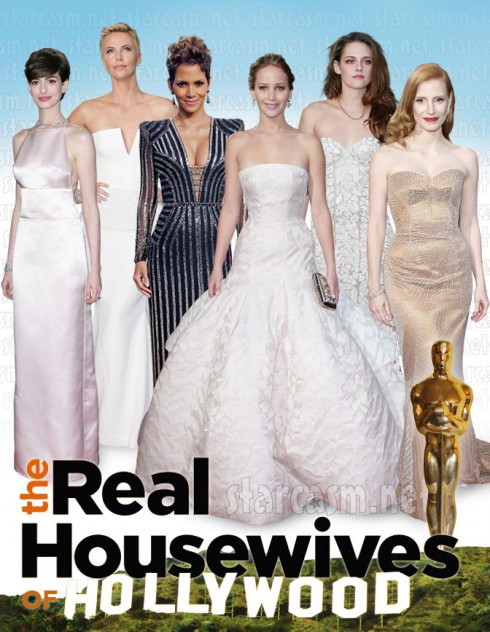 Judging from the photo above, Bravo has just announced the most amazing reality series of all time! Either that, or we know what the top grossing comedy film of 2013 will be! Either that or we know what skit is going to be on Jimmy Kimmel tonight! Either that or I just had some Photoshop fun with The Real Housewives logo and pictures of Anne Hathaway, Charlize Theron, Halle Berry, Jennifer Lawrence, Kristen Stewart and Jessica Chastain from last night’s Oscars red carpet.

Even though I’m sure you’ve guessed by now that it’s obviously the latter, wouldn’t you love to see The Real Housewives of Hollywood? Obviously the villain going in and for the entire run of the series would be Kristen Stewart, due in large part to her unmerited smugness and crappy attitude, but also due to the fact that, aside from Jessica Chastain, she’s the only one without an Oscar. (And any kinship she feels with Jessica is soon completely erased when Jessica wins Best Actress at the 2014 Academy Awards, just before filming of RHOH Season 2 begins.)

Anne Hathaway would try to be nice and stick up for Kristen early on, but after getting burned numerous times, she eventually bails on Kristen completely midway through Season 2.

Halle Berry brings some serious baby daddy drama and Anne Hathaway’s shady ex even makes an appearance on a couple episodes, but otherwise it’s all these highly successful ladies livin’, workin’, and otherwise being their awesome selves. And Kristen Stewart.

Anyone like to try to guess what each of the ladies’ opening quote would be?

PHOTO O’ THE DAY: Most disturbing salon ad ever!