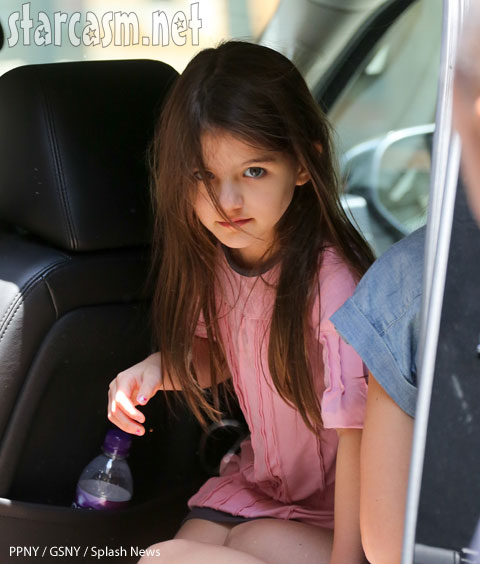 There are rumors that Katie Holmes left Tom Cruise her husband of almost six years to protect their child from that mysterious religion Scientology. Suri is now six-years-old, which is an age where Scientology would start to play a huge part in her life. Although Katie, who was raised a Roman Catholic, got involved in Scientology while she was with Tom, she reportedly never fully committed.

Katie and Tom signed a pre-nup, and Katie reportedly isn’t after money, but full custody of Suri, and a “suitable amount of child support.” Katie is also reportedly able to receive $3 million for every year of marriage to Tom. Their anniversary is in November, so Katie is eligible for between $15 million and $18 million. Katie has been living in a New York apartment, and there is speculation that she filed in New York because it would be easier for her to get full custody of Suri.

So, what is Scientology, and why would Katie be so determined to get her child away from it?

Most people know a little something about Scientology. There’s that a video of Tom that leaked in 2008 (below), and bits and pieces about aliens, e-meters, and “rundowns,” but we’re going to go a bit more in depth about it without writing a book about it. (If you do want to a read a book about it, we suggest Inside Scientology by Janet Rietman.)

Who founded Scientology, and what are it’s beliefs?

Scientology was founded December 1953 in Camden, New Jersey by former pulp science fiction writer L. Ron Hubbard (Lafayette Ronald Hubbard.) Hubbard wasy a charismatic leader who wrote up a self-help book called Dianetics that he used as the basis for a religion after the text was rejected by the psychological community.

Dianetics teaches that painful and traumatic times in our lives are recorded as scars (called engrams) in our “reactive mind” which is below our analytical mind. To get rid of these engrams, Scientologists believe that a person has to go through an “auditing” process where they recall the traumatic event in detail so they can resolve it. This generally has to happen several times before the experience is “neutralized.” These sessions also involve an “E-Meter,” which is essentially a lie-detector that monitors the person’s bodily responses while being asked questions and talking about past events.

Hubbard told his followers that we are all thetans (or souls) that have existed before the beginning of time, and we have been drifting through the ages picking up and discarding physical bodies. The ultimate goal of a thetan is to “feel no need of bodies,” and completely end the cycle of life and death. This belief system is kind of like reincarnation, and even sounds a bit like the Christian ideal of heaven. However, unlike other religions, Scientologists are asked to shell out lots of money to obtain higher and higher “levels,” of enlightenment. In fact, only the most wealthy people could ever gain access to Scientologist’s highest teachings. Thanks to the internet and books, everyone now has access to these teachings, but people in Scientology are advised to never look up information about Scientology outside the church. Many people who can’t afford the fees will quit their jobs and go to work for the Church for low pay in order to get the classes and auditing they desire.

How did Tom Cruise get into Scientolgoy, and what is his role in it?

From very early on, L. Ron Hubbard devised a growth and marketing plan for his church called “Project Celebrity,” and you guessed it, it’s sole purpose was to recruit celebrities and “opinion makers” who could influence the masses. Tom Cruise actually came into Scientology through his first wife Mimi Rogers. Mimi’s father Phil Spickler was “one of the church’s most powerful mission holders,” according to Inside Scientology, and Mimi was an advanced “auditor” (kind of like a counselor.) Cruise was 24 years old, and having just finished Top Gun, was one of hottest young actors around.

He wanted to use the church to deal with some personal problems, and didn’t want the public to know at first, so he enrolled with his real name Thomas Mapother IV. According to Inside Scientology, celebrities’ cases are handled in a very controlled way, to make sure that celebrities see what the church wants them to see, and Tom Cruise was the cream of the crop for them, so he was handled very carefully. They would go so far as to completely repaint and renovate buildings they knew the young star would be visiting.

L. Ron Hubbard died in early 1986, right before Tom joined the church, but several years later Tom bonded deeply with the church’s new leader David Miscavige, who was only two years older than him. One thing they bonded over was guns, and Miscavige had a rifle range redone just to impress Cruise.

Divorce is frowned upon in the church, and troubled couples are required to go through extensive marriage co-audits, but when Tom divorced his first wife Mimi Rogers in 1990 so he could marry Nicole Kidman, everything was taken care of very quickly within the church. The church even assigned their own financial counselor to negotiate a divorce settlement with Rogers (reportedly $10 million, and involved a confidentiality agreement.) By the time she divorced Tom, Mimi was upset with the church’s current management, which had ousted her father. By the time Tom had divorced his second wife Nicole Kidman in 2001, she too was displeased with the church. Insiders have said she was considered to be “Suppressive Person,” and because of that her adoptive children with Tom were kept away from her after the divorce. This is probably a major reason why Katie wants sole custody of Suri, to prevent being estranged from her child the way Nicole was estranged from her children.

In 2001 Cruise, after years of being secretive about his religion, began campaigning for Scientology in a very public way. He claimed that Hubbard’s study technology had cured him of crippling dyslexia, and started promoting a Scientology tutoring program called H.E.L.P. (Hollywood Education and Literacy Project.) He went as far as to say that this program could cure ADD and ADHD, while urging parents to stay away from doctors, who would give their kids “more and more drugs.”

Tom also has been extremely vocal in his dismissal of all psychology and psychiatry. He even got into a tiff in 2005 with Matt Lauer, calling psychiatry a “pseudo-science,” and balking at Matt when he said he knew people who were helped by psychiatric medications.

In 2008, a now-infamous video leaked of a pumped Tom Cruise (set to Mission: Impossible theme music) claiming that Scientology is the path to happiness, and can bring about world peace. In fact, according to Cruise, Scientology can bring about “new and better realities, and improved conditions,” and “being a Scientologist you can look at someone and know absolutely that you can help them.”

Watch out of followup articles on Starcasm.net that further delve into Scientology; including the arguments about whether or not it’s a religion, cult, or even a business, the story of Xenu, what it means to be “clear,” and further examination of Tom Cruise’s role in the church.

Suri Cruise is getting a $24,000 playhouse with running water and electricity for Christmas