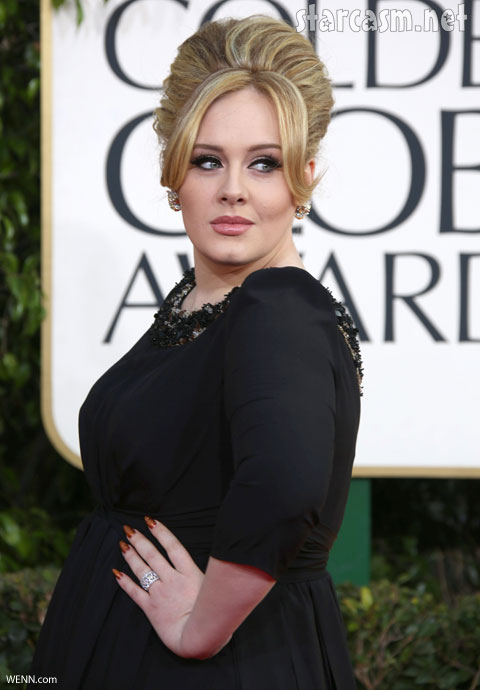 When 24-year-old new mom Adele received attended the Golden Globe awards (where she won for best song!) she was still quiet about revealing her baby boy’s name. She said at the time “It’s too personal and intimate. I’m not ready.”

Now she may have inadvertently revealed her son’s name by getting papped while wearing a nameplate necklace displaying “Angelo.”

Even if that’s his name, she told People magazine that she calls him an entirely different most of the time: “Little Peanut.”

Adele gave birth in October, and has stayed out of the public eye in order to spend time with her new baby and fiance Simon Konecki. She left her man at home, though, for the Globes, attending with her friend Ayda.

She said in her acceptance speech:

I was not expecting this. It’s very strange to be here – thank you so much for letting me be a part of your world for a night. It’s amazing, we’ve been pissing ourselves laughing at all of it.”

And this is for my boyfriend Simon who convinced me to do it and for my lovely son – thank you so much.”

The exstatic singer told reporters after the show: “I feel a little bit kind of overexcited. It’s my first night out since I had my child. And my inspiration normally comes from heartbreak, but I don’t think I am going to have to get devastated again, so that’s good.”

That’s good to hear! Hopefully she won’t be devastated again, but maybe she can continue to sing heartbreaking songs that other people write?

In other exciting Adele news, she’ll be performing at the Oscars (Sunday, February 24! After her Grammy performance, you just know she’ll blow “Skyfall” away, and probably walk away with another award.