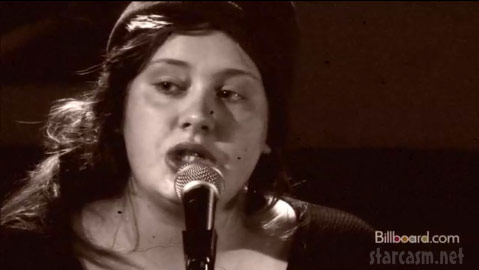 Singer Adele has taken the world by storm with her second album 21 dominating the charts for months now – even returning to the number one slot after a brief concession to Lady Gaga’s Born This Way. Her success has instilled the singer, who takes pride in not using sex to sell her music, with an energizing sense of self confidence evident to anyone who was lucky enough to see her perform recently (before a bout with laryngitis derailed her North American tour in early June).

But, judging from this rare video clip of Adele performing her Grammy-Award-winning single “Chasing Pavements” for Billboard magazine on June 16, 2008, that self confidence was not always there. Her distinctive voice is evident but she seems very timid in this stripped down, “unplugged” acoustic performance:

Damn that girl can sang! C’mon doctors, get that woman’s throat fixed so she can get back on the stage making this world a better place!