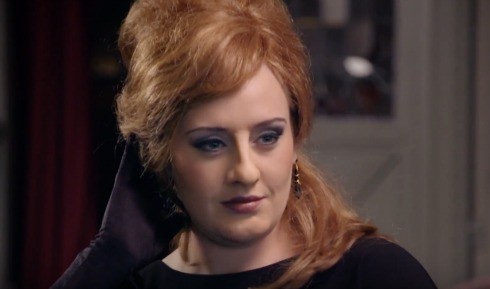 Adele’s much-anticipated third album is here and fans are going crazy over the new melodies and tear-jerking ballads. During her press tour for 25, Adele stopped by The Graham Norton show for a little fun.

The 27-year-old songstress went undercover as “Jenny” to take part in an Adele sing-off. With the addition of a prosthetic nose and chin, she became unrecognizable. “Jenny” joined the other Adele wannabes backstage before their performance of “Make You Feel My Love” and blended in flawlessly. She even showed off her humorous side when one impersonator said, “I can’t wait for the new album,” and Adele snarked back, “She’s taking her time.”

Adele seemed to have everyone fooled…until she got on stage and began singing. One of the impersonators said she knew it was the real Adele immediately saying, “As soon as she opened her mouth–you can’t mimic like that.”

Bravo to Adele for pulling off such a fun and hilarious prank!