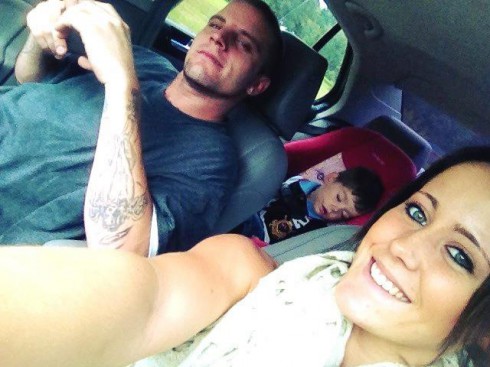 The saga going on between Jenelle Evans and Courtland Rogers has officially been taken to a new, much more serious level. Earlier today in North Carolina, the Teen Mom 2 star filed assault charges against her husband of a month and a half, and it may result in Courtland being thrown behind bars.

We spoke with Jenelle’s attorney Dustin Sullivan who confirms reports that Jenelle went to the magistrate in North Carolina this morning and filed four charges of assault on a female (including at least one of assault on a female with an unborn child) against husband Courtland Rogers. He says there is a court date set for some time in February but Courtland has yet to be served, which makes since given that he is reportedly in Michigan right now. (I am sure many will jump to the conclusion that Courtland left the state because he was “running from the law,” but obviously there is no way to confirm — or deny — that right now.)

Sullivan goes on to say that Jenelle will be defended by the state of North Carolina in the matter.

Though we aren’t certain if Jenelle’s charges apply, North Carolina passed the Unborn Victims of Violence Act (often referred to as Ethen’s Law) in April and it took effect in December. “The legislation deems that anyone who commits murder, manslaughter or assault against a pregnant woman is guilty of the same crimes against the fetus, regardless of whether an attacker knows about the pregnancy,” according to WRAL. (Click the link to learn more about the law.)

While it has yet to be reported when the alleged assault occurred, it’s probable that it went down on Tuesday morning before Jenelle was admitted to the hospital. The two had been fighting after Courtland snuck out of their home for a wild night of drinking. Following that, Jenelle claims to have found messages between him and other women. Tensions were at an all-time high.

Courtland, who has been much quieter than usual since yesterday, recently spoke with Radar and is denying all charges. “I did not hit my wife,” Courtland insists. “This is not true at all.” However, Courtland did flee the state yesterday, which sort of raises a red flag. Earlier this month, Courtland had appeared in court and although it was never revealed how that court date went, it is very possible that he could be on probation, which means that these charges could very well land him behind bars.

Despite Courtland’s denials, the source insists that Jenelle was assaulted and has bruises on her face from the incident. In addition to that, Jenelle even claimed to have possibly fractured her skull.

Teen Mom 2’s Jenelle Evans opens up about her abortion