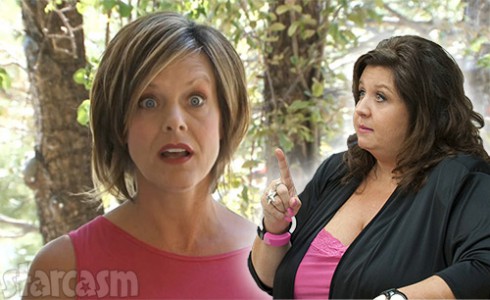 Kelly Hyland got little more than a slap on the wrist for slapping and pulling Dance Moms‘ Abby Lee Miller while filming in November 2013. The New York Daily News reports a Bronx judge agreed to dismiss the misdemeanor assault charge against Kelly if she completes two days of “counseling.” She must also stay away from her daughters’ former coach for six months.

Kelly’s lawyer said the case went on for far too long.

“If this were anyone else, this kind of case would have been resolved at the first or second appearance,” attorney Steven Goldstein said.

Kelly refused to comment, citing pending cases — which is likely a reference to 13-year-old daughter Paige Hyland’s emotional distress lawsuit against the Abby Lee Dance Company owner. Kelly also filed a $5 million lawsuit against Abby and Collins Avenue Entertainment in February 2014, but a judge said in August 2014 that he would likely move to dismiss it.

The assault incident in question started backstage at a November 2013 competition when Abby suggested replacing Kelly’s daughters in a show with a new dancer. Surrounded by other moms and young dancers, Kelly and Abby got into a screaming match. It escalated when Abby put her finger in Kelly’s face and Kelly responded by hitting Abby’s face and pulling her hair.

Despite the continuing legal battles brought about by Kelly, Abby seems to be doing well for herself: She’s setting up a new studio in Los Angeles.