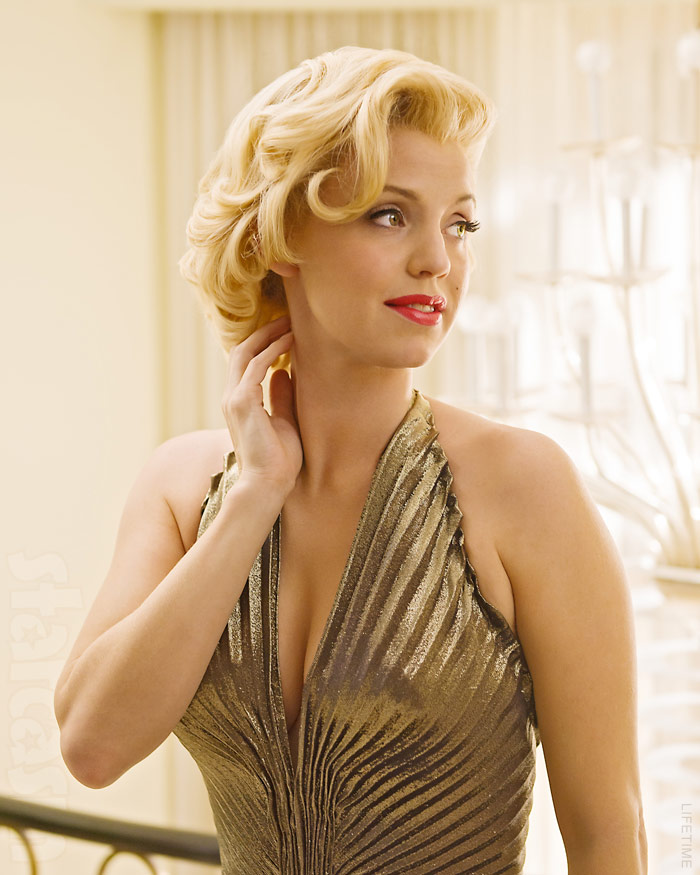 Lifetime continues giving female entertainment icons the miniseries treatment, this time enlisting the help of of Academy Award winner Susan Sarandon for The Secret Life of Marilyn Monroe set to air May 30 and 31st. Susan will play Marilyn’s mother Gladys Mortenson, who spent a great deal of time in an institution due to mental illness, and actress Kelli Garner (The Aviator, Pan Am) will take on the role of Norma Jeane Mortenson, aka Marilyn Monroe.

Here is a photo of Kelli and Susan together as mother and daughter: 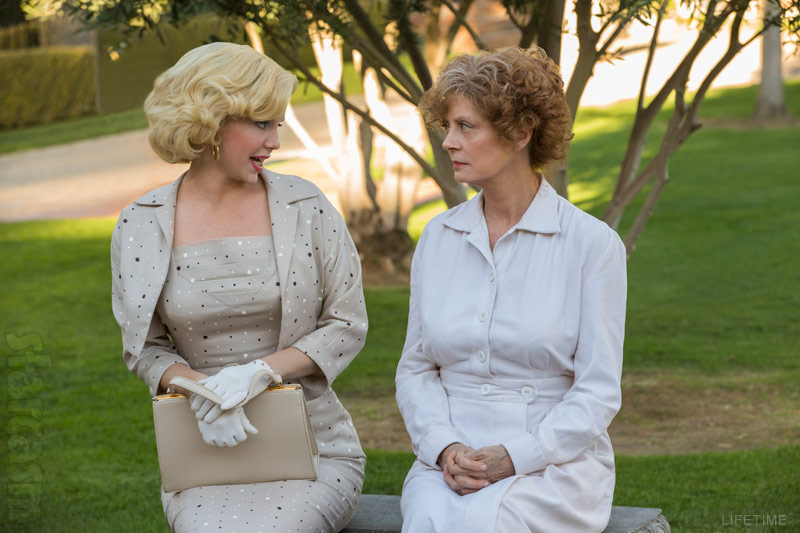 Much like actress Agnes Bruckner in the network’s original film Anna Nicole, Kelli Garner gets a rather stunning makeover to become Hollywood’s most memorable starlet. Here are side-by-side photos of Marilyn Monroe and Kelli Garner as Marilyn in which both are wearing the famous gold plunging neckline dress featured in Gentlemen Prefer Blondes: 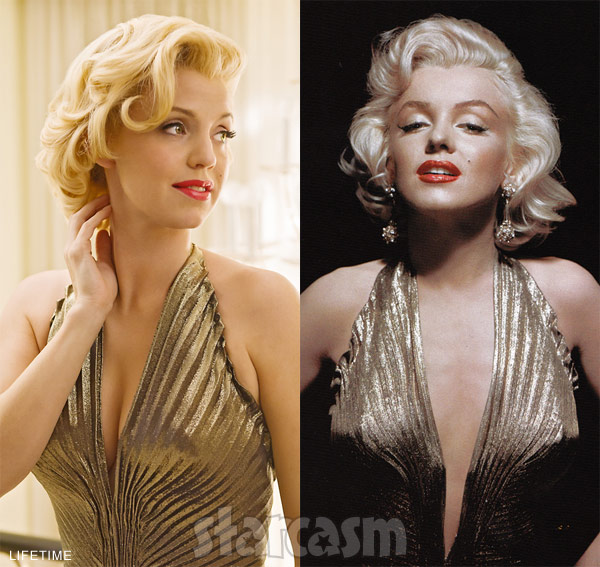 And of course Kelli will be recreating the memorable scene from The Seven Year Itch in which Marilyn Monroe’s white dress is blown up by an updraft from a subway grating: 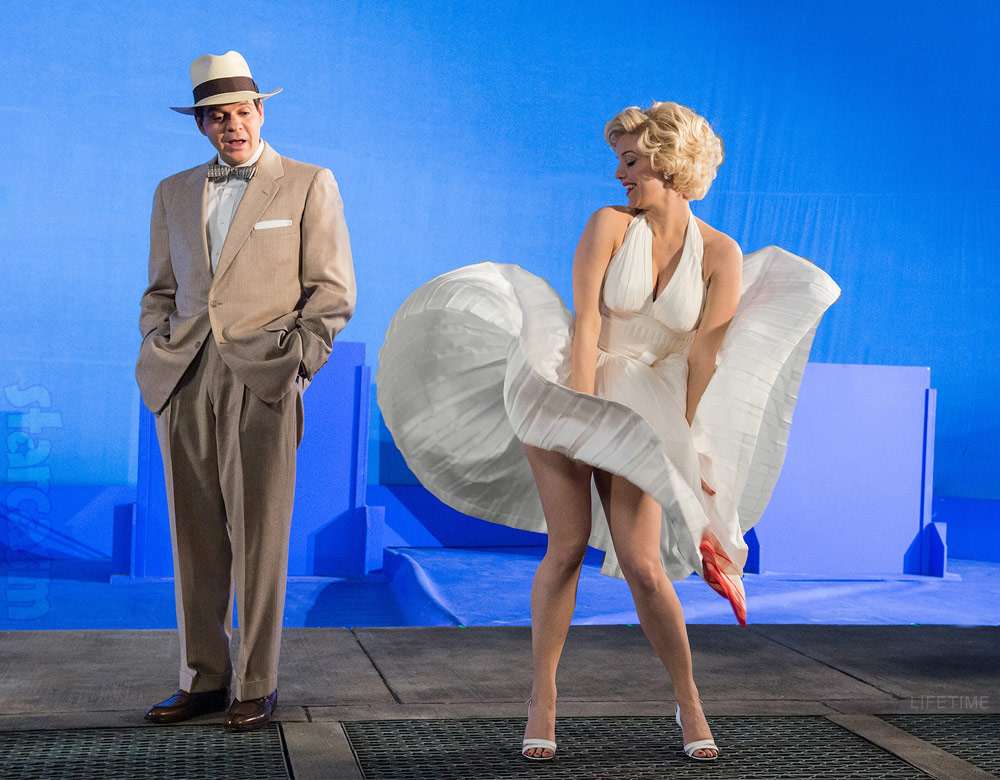 The Secret Life of Marilyn Monroe is based on the New York Times best-selling book with the same tile by author J. Randy Taraborrelli and “uncovers many closely-guarded secrets the blonde bombshell kept from the public,” according to a Lifetime press release. The network further describes the four-hour event:

The Secret Life of Marilyn Monroe begins with a portrait of a young Norma Jeane Mortenson as she battles a lonely and loveless existence with an absent mother. Despite the odds, Norma Jeane blossoms into a funny, smart and ambitious woman and soon reinvents herself to become the symbol of an era. She revels in stardom, yet remains a fragile artist, desperate for the approval and protection of men. The outside world never truly sees or understands the real Marilyn, a woman so different from her public persona. As her fame grows, all three of her marriages crumble beneath her quite publicly, including her relationships with Joe DiMaggio (Morgan) and Arthur Miller. Ultimately, Marilyn could never control her inner demons and the onslaught of mental illness inherited from her mother, Gladys (Sarandon) – a woman she loves, hates and wants desperately to save. Although the studio told the world that Marilyn’s mother was dead, it is the great secret of Marilyn’s life that Gladys remained a vital and troubling part of her world. As Marilyn cares for her mother, her obsession with President John F. Kennedy drives her over the edge and, ultimately, into an insane asylum. Still, as Marilyn Monroe soldiers on, she gives the performance of her life, successfully hiding her darkest secrets from the world. 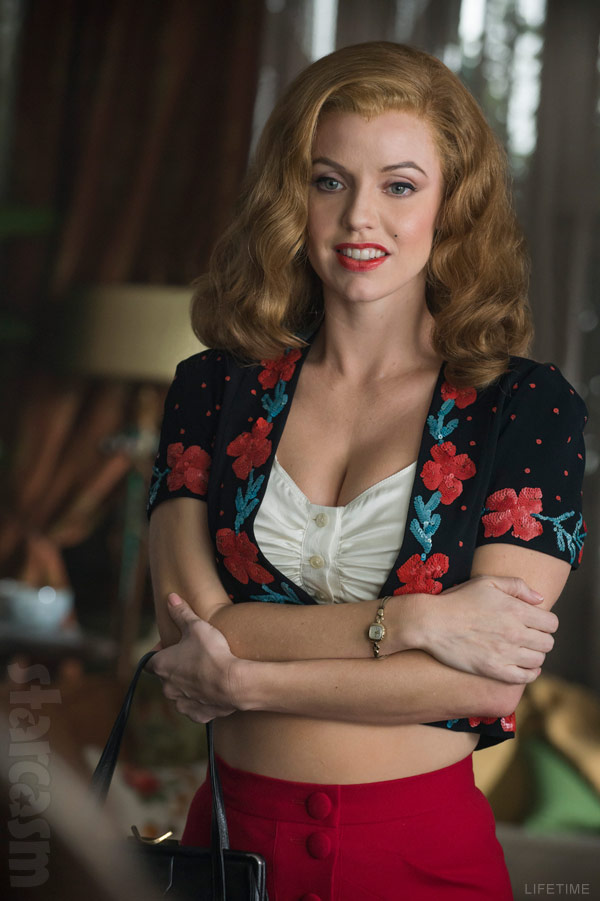 In addition to Susan Sarandon and Kelli Garner, the cast includes: 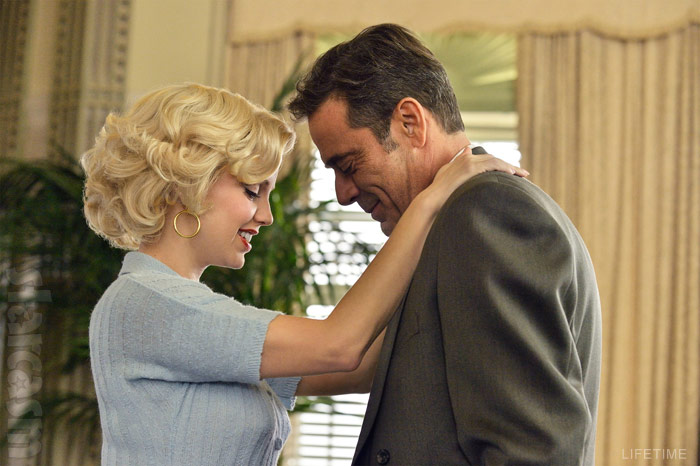 The Secret Life of Marilyn Monroe premieres Saturday, May 30, and Sunday, May 31, at 8/7c on Lifetime.

Here are two more photos, beginning with Emily Watson and Susan Sarandon and then another with Susan as Gladys looking to be in pretty bad shape: 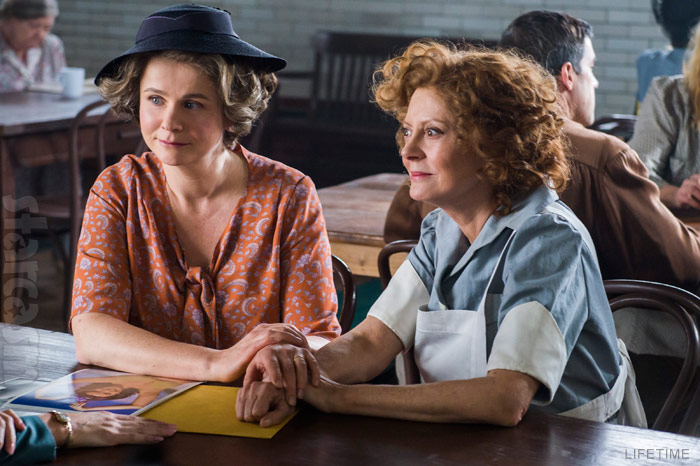 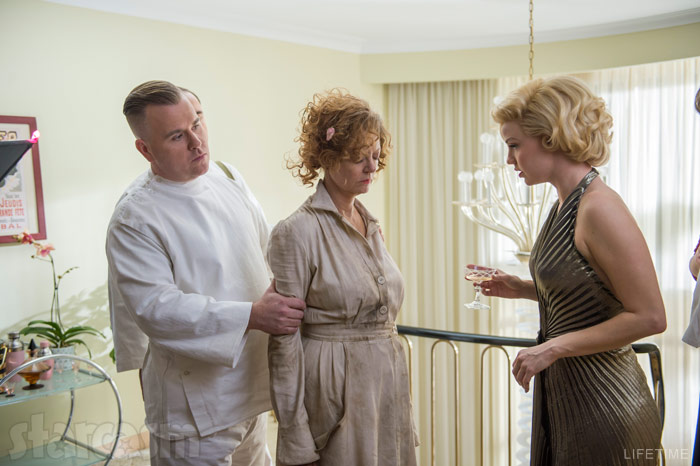 This train has left the station! #Marilyn #Lifetime #CrabBibs

Surrounded by so many talented women #costumes #goingtothechapel #normajean #marilyn

Day 1 "We are all of us stars, and we deserve to twinkle " #Marilyn #itsshowtime #chanel #roses

Gettin wiggy with it #Marilyn

@sideoftheroadfilms thanks for the water #Marilyn

It's just one of those days…

Lindsay Lohan simultaneously dissed and complimented by director of The Canyons