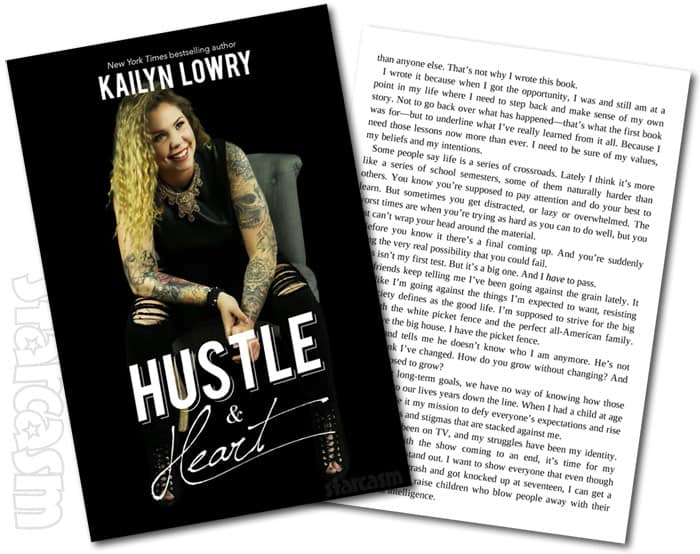 Teen Mom 2 star Kailyn Lowry’s second book Hustle and Heart is scheduled to be released on November 22, but the publisher has released a few chapters early as a preview. In the preview chapters, Kail talks more about her experiences being sexually assaulted and raped as a teen as well as how she deals with the inevitable daily negativity she faces being a reality television star. But, perhaps the most shocking information in the preview is Kail casually stating that Teen Mom 2 is “coming to an end!”

Here is an excerpt from the Hustle and Heart Introduction that includes Kail’s comment about the show ending:

When we set long-term goals, we have no way of knowing how those goals will fit into our lives years down the line. When I had a child at age seventeen, I made it my mission to defy everyone’s expectations and rise above the statistics and stigmas that are stacked against me.

Since 2010 I’ve been on TV, and my struggles have been my identity. Now, especially with the show coming to an end, it’s time for my accomplishments to stand out. I want to show everyone that even though I grew up like white trash and got knocked up at seventeen, I can get a Bachelor’s degree and raise children who blow people away with their manners, wit and intelligence.

It is unclear exactly what kind of a timeline Kail is talking about, but they don’t usually know whether or not there will be a new season with a lot of notice, so I assume that if she has been told the show is ending, that it will happen after the upcoming season. That being said, I don’t believe MTV knows for sure from season to season, so an announcement to the cast that they are cancelling the show before the new season even airs seems unlikely. Ratings are often very difficult to predict, and although Teen Mom 2 ratings have been on a decline over the last couple of seasons, there is no way to know for sure how next season will do — especially given that Chelsea is getting married, Jenelle is having a baby, Kail is getting divorced, and who in the world knows what might really be going on with Leah!

Of course, if one of more of the stars have told MTV that this is their last season (Chelsea seems like the most likely), or perhaps the salary demands have gotten way out of hand, then perhaps that could have motivated the network to make the announcement early. It has been speculated for some time that the series might be wrapping up, and Kail’s statement seems to be the first real evidence to support that. I suppose we will have to all continue to wait and see — or perhaps you can rush out and buy Kail’s book on November 22 to see if she shares more specific details on the end of Teen Mom 2!

Meanwhile, in other Kail Lowry news, fans and detractors have been going wild over a video posted by Kail on Snapchat yesterday in which you can see a tab on her internet browser open to a sex tips article:

The clip featured a video conversation Kail was having with a girl friend, and to the side you can clearly see the browser tab for the College Life article “50 Things You Can Do To Spice Up Your Sex Life.” The article is just a numbered list of tips ranging from the seemingly obvious (“3. If there’s one position that you always do [like missionary] try to steer clear of that position”) to seemingly poor advice for a public figure (“37. Video record yourselves having sex and then watch it back…”) to edgy (“21. One of you tie the other up – the free person generally does all the work but they get to have their way with their partner”) to potentially unsafe (“44. Spontaneous b|owjobs, like when you’re on a road trip”).

So, it seems Kail is looking to spice up her sex life. (Or perhaps she is writing anonymous articles for College Life? lol) This seems to have created quite a buzz, but I’m over her like: