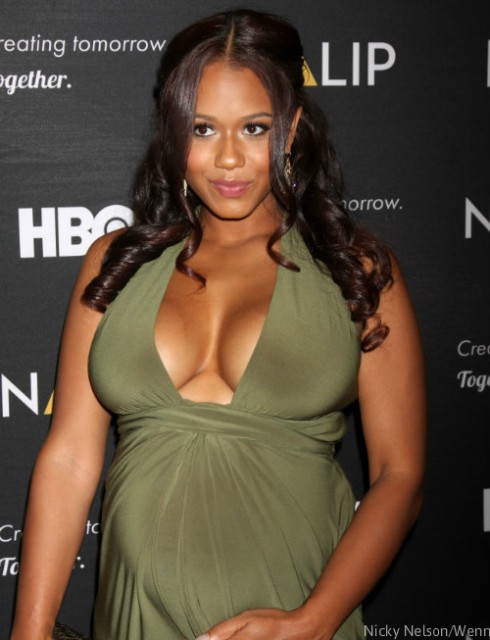 “Yesterday I was blessed with the birth of my Richie Bear. Unfortunately, last night he took his place with the Lord and we said goodbye,” Danielle said on Instagram yesterday along with a picture of Richie’s handprint on her chest. “I so appreciate the prayers and support from everyone. He touched my heart and was perfect in so many ways.”

During her pregnancy, Danielle revealed doctors diagnosed the baby with omphalocele during an ultrasound in March.

“The tech said, ‘I can’t see the sex…because I am seeing…intestines,” Danielle told Us Magazine in June, explaining Richie’s stomach, gallbladder, spleen and liver were outside his torso because his anterior abdomen wall did not close properly. The severity of the condition varies. In the case of Danielle’s son, doctors said there was a 53 percent chance of mortality after birth.

Although doctors advised Danielle and her husband to terminate the pregnancy at the time of the diagnosis, the couple decided to go through to term.

“I said to [Richard], ‘Could you live with this?’ Because I know can. I know I could be in a hospital every day,” said Danielle, who has two older children. “As a mother, I will do whatever it takes for my child… No matter how long he has in this world, I could not imagine taking his chance away.”

After Richie’s passing, Christina Milian praised her sister and brother-in-law for showing “the true measure of courage and faith for the last 9 months.” She added, “Our family was blessed to have met our little Angel Baby Richie. We were fighting for him and with him the whole way and are now coping with the direction in which fate took.”

Our thoughts are with the family.