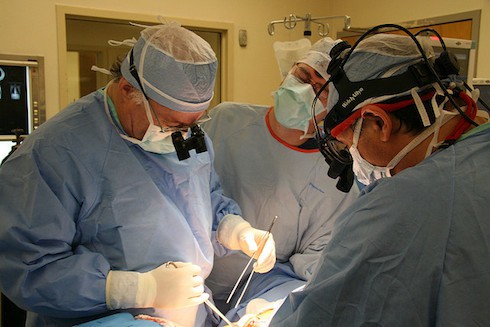 A British man who lost his penis in a horrific childhood accident has been granted a new, bionic penis, thanks to “pioneering” surgery.

Mohammed Abad, 43, of Scotland, lost his original penis at the age of six, when he was hit by a car–and dragged for nearly 600 yards.

Over the past three years, though, doctors have been growing and crafting a bionic penis replacement for Abad, based on skin grafts they took from his arm. The bionic penis is not completely robotic–though it does have one function that allows Abad near-robotic control.

There are tubes along the sides of his eight-inch bionic member. In order to activate the penis, Abad pushes a button installed on his testicle, and fluid fills the penile chamber, giving him an erection: “When you want a bit of action you press the ‘on’ button. When you are finished you press another button. It takes seconds. Doctors have told me to keep practicing.”

A clearly happy Abad added, “It’s difficult to sleep as [my eight-inch bionic penis] gets in the way.”

According to UK tabloid The Sun, Abad wed two years ago without telling his wife that he had no penis. She left him one year later.

It’s not all fun and games for the Scotsman, though. Now that he has a shiny new bionic penis, Abad is looking forward to starting a family: he describes such a possibility as “a miracle.”