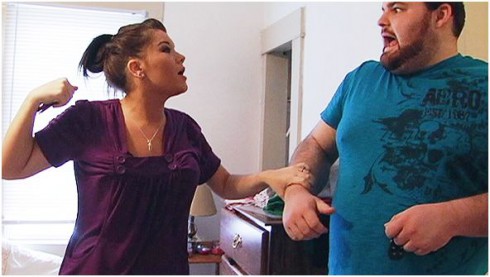 Yesterday Amber Portwood was charged with two counts of felony domestic violence against her baby’s father Gary, but her cousin Krystal claims that the domestic violence was not one sided. Krystal, who has been featured on the show, tells Radaronline that Gary has “laid his hands” on Amber many times, and even shoved her against a wall.

Before Teen Mom Season 2 aired, the biggest scandal concerning Amber Portwood was how skinny she was getting, but her personal drama took an alarmingly dark turn.

Things were already a bit off. Amber was captured on 16 & Pregnant and the first season of Teen Mom fighting with her baby’s father and on-again off-again fiance Gary Shirley, even choking and slapping him at some point.

Season Two their relationship deteriorated further, with Gary threatening to leave many times. It all came to head on camera when Gary took Leah from Amber, and Amber responded by punching Gary in the face and kicking him in the back as he walked downstairs.

Gary’s mother Carol Zizak spoke to OK! Magazine in support of Amber after news of the felony charges broke: “She knows I love her as if she were my own flesh and blood and the door is always open to her to come over and cry on my shoulder or come over for no reason at all.”

This situation was already horrible, but domestic violence on both sides just makes it that much worse. Hopefully these two will definitely stay apart this time and work on their own issues for the sake of their daughter Leah.

Is Gwen Stefani having a breast lift? Star reportedly contemplates surgery ahead of album release